Aether Weapons also known as "ghost weapons" or "ghost blades" are exquisitely crafted weapons, with an ethereal quality that allows them to pass through solid materials like arms and armour to wound the living being beneath. The weapons so rare, they are considered mythical to all but the most informed scholars and adventurers. Such myths often feature individuals or even entire voidcraft, mysteriously disappearing in a pale, misty glow. They are created by a nomadic race of xenos known as the Stryxis and come in 'Blade', 'Lance', 'Whip' and 'Rifle' variants. As with other items associated with the Cold Trade, their use is prohibited and punishable with the harshest of sentences[1a][1b][2][3]

Aether blades are hafted with a blue-grey alloy that appears to be grown rather than conventionally manufactured. Projecting the hilt is a ghostly energy blade, resembling mist or smoke, that dances and flickers. These weapons are so beautiful and elegant that they are often falsely attributed to the work of the Eldar, who conversely consider them and their ilk intolerable anathema. These blades can pass through almost all solid matter, including flesh and bone, and deal deadly injuries without leaving a mark.[1b][3]

They are however, not without drawbacks. Apart from their obvious xenos nature, which limits their use to only the most daring, well connected and influential, these blades insubstantial nature negates any force behind a blow, meaning that a user's strength will have little impact on the blades effectiveness. Further, the intangibility of the blade makes it of little to no use when attempting to parry strikes from a foe. As well as this, the unliving nature of mechanical constructs or entities of warp grants them an immunity to the weapon. Finally, these blades are quite fragile to psychic barriers such as Hexagrammic Wards, Untouchables or similar shields, like a ships Gellar Field. For reasons of much speculation, these barriers will cause the blade to flicker and dissipate; rendering it inactive for up to 10 days.[1b][3]

Hauntingly beautiful and highly sought after works of art to aficionados of xenos craftsmanship, the Aether Lance is longer and even more deadly than traditional Aether Blades. With a two metre-long haft of exotic blue-gray alloys seemingly grown rather than built, and a smoky, flickering mist-blade, the weapon is both mysterious and alluring to all but the most zealous adherents to the Imperial Cult despite its xenos nature. Others desire it not for its beauty, but for its strange, intangible qualities. Like other Aether weapons, the blade of the Aether Lance is completely insubstantial, and will pass through almost any material, including flesh, without leaving a mark, seemingly wounding the victim's very essence. While the weapons longer haft makes it possible to parry, it is still exceedingly difficult to do so and the weapons unwieldy nature makes it almost impossible for the wielder to do likewise. The Aether Lance otherwise possesses the same qualities and drawbacks as the Aether Blade.[1b][3] 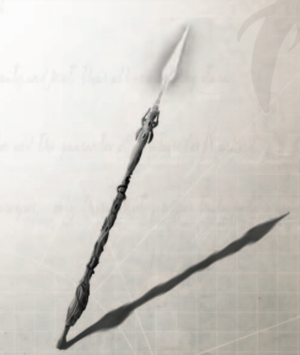 Aether Whips resemble their Blade and Lance variants in that they are made of a solid grip and a long incorporeal lash which glows with ghostly energy. These whips offer the same advantages and disadvantages as other Aether weaponry. The most popular conjecture surrounding the weapon is that their flexible energy cords are mainly employed to keep slave populations on board Stryxis vessels in line. It is believed that these vicious weapons are used by only the most socially-advanced Stryxis.[2]

Aether Rifles are very peculiar and rare, even when compared to their more common melee variants. Their design patterns differ slightly from their melee cousins, but have very similar effects on stricken targets. The ammunition fired appears to be made Aether energy. The energy's characteristic selective intangibility makes it incredibly deadly against most targets.[2]