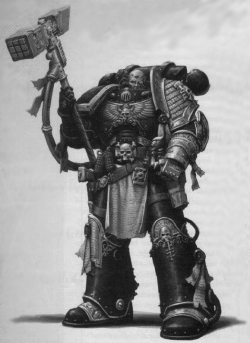 Brother-Sergeant Agamorr is a member of the Deathwatch from the Hammers of Retribution Space Marine Chapter.[1a]

Wielding his ancient thunder hammer, Agamorr has served in the Deathwatch for just over three decades; his standard original ten-year tour of duty was extended when it was discovered that he had a knack for eliminating unusual xenoforms.[1a]

Agamorr assisted Inquisitor Vaarak's Acolytes in boarding the Space Hulk Twilight; after a distress signal identified as belonging to the legendary Daemonhunter Adorjin, last seen boarding a Blackship and had been missing for six centuries. The Inquisition felt honour bound to try to determine Adorjin’s fate and recover her legendary holy blade, the Luminous Reproach which had been blessed by Sebastian Thor himself and had a long history of service in the Inquisition.[1b]

The Acolytes and Agamorr had just over fifteen hours to determine what happened to Adorjin and flee the Twilight, as Battlefleet Calixis would destroy the space hulk before it collided with the planet Scintilla, the sector capitol of the Calixis Sector. Entering the space hulk they encountered Warp Ghosts of the psykers slain aboard the missing Blackship and battled Dark Eldar and Warp Beasts from the Kabal of Crimson Woes[1b]. It was after a battle with the Kabal, that the mission turned against the group, as in a final act of defiance one of its dying members blew into the Omni-Dimensional Whistle and called forth a horde of warp beasts to overwhelm them. Thinking quickly Agamorr pushed the acolytes out of the way and ordered them to continue the mission. Standing defiantly in front of the daemons, he held the warp beasts at bay long enough for them to get away before he was engulfed by the horde.[1c]

Heeding his orders the Acolytes moved quickly began to home in on Adorijin's signal. Entering the remnants of the Blackship they encountered another group of acolytes sent by Inquisitor Soldevan of the Ordo Hereticus. After a tense standoff they agreed to work together[1d]. Advancing further into the Blackship, they found the remains of Inquisitor Adorjin and Nekaybraianon, the Daemon Prince she slew. They retrieved the Luminous Reproach as well as the Liber Daemonica, a book on denizens of the warp.[1e] As the Acolytes made their way to the escape pods within the Blackship they were attacked by the Crimson Woes in overwhelming numbers. Things turned even more desperate as one of Soldevan's acolytes grabbed the Liber Daemonica and revealed himself to be secretly working for the Serrated Query, a group of war profiteers working with the Kabal.[1f]

Just as the acolytes were about to be killed, Agamorr entered the battle killing several of the Crimson Woes in seconds. Though his armour was severely wrecked and he had suffered numerous wounds to his body, Agamorr was able to turn the tide of battle in the acolytes favor. The group managed to kill the traitor acolyte and retrieve the Liber Daemonica. Just then the space hulk began to tilt as Battlefleet Calixis began bombarding it. The surviving Crimson Woes retreated into the warp and the group made its way to the escape pods. Just after they were launched, the space hulk broke apart behind them.[1f]