The Age of the Imperium is one of the ages in the history of mankind. It began c.M30 and continues to this day.[1] [2]

Rise of the Emperor

During the Age of Strife Warp storms had separated Terra from its colonies and plunged disparate human civilisations across the galaxy into disarray and chaos. When the storms abated, a new powerful leader called the Emperor of Mankind emerged. He conquered Terra and entered an alliance with the Mechanicum on Mars. With his Legions of genetically engineered Space Marines, he planned to reunite mankind.[2a] 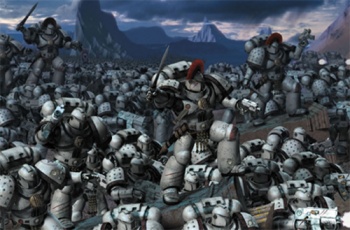 The Space Marines of old during the Great Crusade

The Great Crusade lasted 200 years and brought many long-lost systems into the fold of the Imperium. Under the War Council of the Emperor and his Primarchs, vast Expedition Fleets of the Imperial Army and Space Marine Legions fought back aliens and warp-tainted forces that had gained a foothold in the domain of man during the Age of Strife.[2a]

The Great Crusade ended with the Horus Heresy. Horus, greatest among the Primarchs and the favoured son of the Emperor, fell under the influence of the Gods of Chaos. In an attempt to usurp his creator and take his place as Emperor of Mankind, he took control of a full third of the whole Imperium's armed forces, including half of the Space Marine Legions) and marched towards Terra. He was ultimately slain, but the Emperor was mortally wounded and the Imperium left at the brink of collapse.[1] [2]

Ages of the Imperium

During the Age of Rebirth the Imperium slowly recovered from the Horus Heresy.[1]

The wars of the Great Scouring were fought in the decades after the Horus' demise. In a lengthy campaign the Imperium hunted and banished the remaining traitors from their realm. Eventually the followers of Chaos found refuge in the Eye of Terror.[3] At the same time many alien races that had been fought back during the Great Crusade reappeared and plagued the vulnerable worlds of man.[2b] One of the greatest renewed threats to mankind was that of the Ork, which nearly reunified as a race under a Warboss known only as The Beast. His Waaagh! was halted only at great cost.

In order to prevent a single person from controlling as much military power as Horus did and thus eliminating the risk of another large scale military rebellion, numerous reforms were drawn up. The Imperial Army's link to the Imperial Fleet was severed, creating two separate forces, the Imperial Guard and Navy. The remaining loyal Space Marine Legions adopted the Codex Astartes written by Primarch Roboute Guilliman and were split into several smaller Chapters.[1] [4]

The Forging is also known as the Golden Age of the Imperium.

During this period the Adeptus Terra brought the most important systems under its control and expanded the borders of the Imperium. Internal stability was gained with the establishment of Astropathic Choirs on countless worlds and the discovery of valuable STCs from the Dark Age of Technology.

Once more the Imperium expunged the forces of Chaos and Xenos alike in the galaxy and reclaimed lost regions.[1]

The Nova Terra Interregnum is also known as the time of twin Empires and lasted for 9 centuries.

The Ur-Council of Nova Terra dismissed the authority of the High Lords of Terra and claimed rule of the Segmentum Pacificus.

During the Cataclysm of Souls in 975.M35 the Ecclesiarchy tried to unite the Imperium as a religious state. Their efforts ended in massive religious wars against the Ur-Council.[1]

The Age of Apostasy is renowned for the Reign of Blood, the time of Goge Vandire's dual rule as Ecclesiarch and Master of the Administratum. Vandire plunged the Imperium into a civil war that lasted for seven decades.[1]

The Age of Redemption

Beginning with the Great Cull by the High Lords of Terra, thousands of worlds glowed with the pyres of heretics burning. The Imperial Cult grew in power as never before, as those who defied the Ecclesiarchy were purged in blood and tears.[1]

A multitude of crusades were launched to recapture the squandered wealth of the Imperium. Saint Basillius judged that thirty Space Marine Chapters were found wanting and they embarked on a crusade into the Eye of Terror, intent on purging those worlds stolen by the birth of Slaanesh.[1]

At the height of this fervour thousands of worlds were left inadequately defended as sector fleets, Imperial Guard Regiments, and Space Marine chapters were sent on increasingly longer and more terrible crusades.[1]

With the Imperium's military resources exhausted due to the religious crusades during the Age of Redemption, Ork and Chaos forces were able to overwhelm many planets and systems. More and more Space Marine Chapters were granted control over systems in order to retain stability.[1]

These are the closing years of the 41st millennium.

The galaxy has become an increasingly hostile place and the realm of the Imperium has begun to crumble. The light of the Astronomican is fading and the Golden Throne upon which the Emperor has rested for ten millennia has been discovered to have irreparable failures.[1]

By the end of the 41st Millennium, the Imperium was thrown into great turmoil as multiple disasters erupt. Cadia was destroyed by the Thirteenth Black Crusade. Much of the Imperium was divided in two by the subsequent formation of the Great Rift, and in an event known as The Blackness many worlds fell to the ensuing chaos. Fortunately for mankind, the Primarch Roboute Guilliman has been reborn.

The Age of the Dark Imperium directly follows the formation of the Great Rift.[5] Though the Galaxy has been effectively split in two by the event, the Imperium has endured thanks to the efforts of Roboute Guilliman.[6]