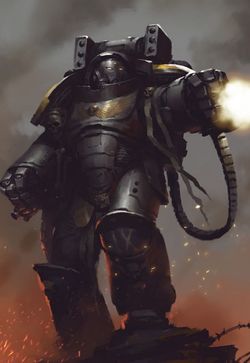 Primaris Aggressors are clad in durable Gravis Pattern Power Armour which despite its appearance keeps them quite mobile unlike their more heavily armored Centurion cousins.[3] They are quite mobile and able to negotiate rough terrain, making them versatile troops. Often employed in specific circumstances or on certain terrain, Aggressor Squads are used as reserves to plug breaches in gun lines or to spearhead an advance. The range of their weaponry is not too long, but when they get close enough to open fire, the result is a sweeping fusillade of large-calibre bolter shells that can shatter enemy charges.

Aggressors wield either twin Flame Gauntlets, that billow forth burning promethium[1] or Boltstorm Gauntlets that barrage the enemy with Bolter shells. Some are also equipped with shoulder-mounted Fragstorm Grenade Launchers.[2]

Since being introduced during the Ultima Founding and Roboute Guilliman’s reworking of the Codex Astartes, the Aggressor Squads have proven themselves as a devastating force many times over. Chapter's that have embraced the Aggressors include the Iron Hands, Salamanders, and Black Templars.[3]