The Agripinaa Sector is a Sector of Imperial space. It is located in Segmentum Obscurus close to the Eye of Terror. It was a major producer of materials (especially weapons and ammunition) for Cadia and formed a linchpin in the overall defence of the Cadian Gate. In comparison to other sectors it is a wealthy and prosperous area and produces many regiments for the Imperial Guard.[1]

At the start of the Thirteenth Black Crusade, vast numbers of plague hulks were reported. Many were searched and destroyed by Space Marines but ultimately some escaped their attention. Some of these came to spread disease and pestilence throughout the Agripinaa sector. In conjunction with the Belis Corona sector, they were the first to see the rise of the plague zombies created by the spread of the plague, now named the Curse of Unbelief. Cults preaching that the Imperium as a whole had failed and forsaken the teachings of the Emperor grew throughout the sector. Imperial rule on Malin's Reach and Lelithar broke down as the plague had crippled any hopes of restraining the fanatics. Self-mutilation became normal and mobs attacked any naval facilities or general symbol of the Imperium and mob rule replaced that of the Administratum.[2]

Raids by unknown assailants occurred in the Dentor, Sarlax, Amistel and Malin's Reach systems, each resulting in the planet's population partly slaughtered. Possibly Chaos Space Marines of blue and gold armour. Naval forces then proceeded to retreat to their bases but on Lelithar, the Voice of the Emperor rose to public power. He was an orator of fearsome skill who could rouse entire planets to his cause. The people overran the remaining Imperial facilities. Cults to the Voice emerged on Yayor, Amistel, Albitern and even inmates of Bar-el. Kill-teams and assassins were sent to kill the Voice, however none succeeded. It is possible that a report by a Vindicare Assassin shows that it was Cypher pretending to be the this Voice, as he was armed with a sword and a pair of exquisite pistols.[2]

After a combat with the Chaos ship Darkblood which saw it crippled, Imperial forces retreated in the face of overwhelming numbers to Aurent. Also, a decisive battle which saw a small number of Imperial ships hold back a Chaos fleet at the Ilthirium Belt allowed the Battlefleet Agripinaa to arrive and allow the remaining ships to retreat. This however left the Agripinaa sector open to invasion and the planets of this and the Belis Corona subsector soon became nightmarish hells of death and pestilence. Amistel Majoris became the site of a major conflict, Plague Marines of the Death Guard slaughtered the defence population until the Drookian Fen Guard reinforced their numbers. Colonel Pertaj orchestrated a masterful defensive plan however he died of the plague before the plans could be put into action. He had devised a cunning series of trenches which would lead their enemy into traps and ambushes. Eventually the Howling Griffons and the Legio Astorum arrived to man the defences, impervious as they were to the plague due to being sealed off from it. The fighting devolved into brutal trench warfare.[2]

Lelithar was attacked by the Jouran Dragoons and Legio Ignatum in an effort to retake the planet after it rebelled under the rule of the Voice of the Emperor. They landed at Gorgosa and laid siege to the Imperial palace, but it decimated much of the city and millions of the city's population rose up against the Imperial forces and were killed. Eventually the Death Spectres arrived and the siege ground on.[2]

Harlequins were rumoured to be sighted on Agripinaa and Scelus but there is also report of Eldar attacking an Ultramarines Honour Guard, although whether they were Eldar or Dark Eldar is unknown. One man in the Agripinaa sector, Regu Hane, was raised to Sainthood having single handedly driving away a force of Khorne daemons.

Tzeentchian cults grow in number across the Agripinaa sector, possibly to redirect attention away from Ahriman's attack on the webway. Erebus lures Eldar and Ultramarines to Malin's Reach only for war to break out between the two while he and his Word Bearers wage war elsewhere.

Kharn the Betrayer has appeared on Tabor with an army of Berserkers and is proceeding to slaughter populations while wallowing in their blood. Malin's Reach has been devastated by the crazed forces of the Stigmatus Covenant who are known to destroy and defile anything holy in the realm of man.

Lord Inquisitor Coteaz arrives in the Agripinaa sector armed with many holds of cyclonic torpedoes just as the strongest bastions of Imperial power begin to fail. Also, the edges of warp storm Baphomael reach the edges of Agrapinaa making warp travel dangerous. Kharn continues his rampage across Tabor. Inquisitor Mathius has been tracking Chaos Magus Batezu for some time throughout the sector.

The Agripinaa sector is gripped by the forces of the most might plagues as the Death Guard are unleashed.

Finally, as the fighting reaches its climax, reports show that the majority of the Agripinaa sector is a blasted wasteland. The Imperial Navy controls the space around the planets, however many of them have fallen to Chaos, the Agri Worlds of Yayor, Ulthor and Dentor and Hive Worlds of Albitern, Amistel and Tabor may yet cause the downfall of the other systems and planets. Typhus has claimed the Ulthor system as his own, mutating the planets within to Daemon Worlds, giving the forces of Chaos a real stronghold in the materium. The current state of the Agripinaa sector is desperate as all but the Agripinaa system are renegade or destroyed. 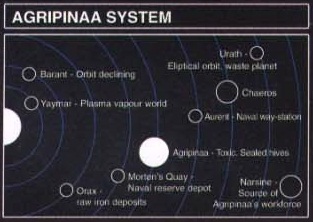 Attacked by an unknown raiding force and population discovered butchered like livestock after Dentor. On Amistel Majoris, Plague Marines landed and decimated the defence forces until the Drookian Fen Guard arrived to bolster defences. The planet was reduced to a mouldering mess of decaying corpses, however the defence was to be masterful and allowed Imperial forces to survive until the arrival of the Howling Griffons and Legio Astorum The war then devolved into trench warfare.[2] Imperial Control Rate: 14%, State: Anarchy, Resistance: Moderate, Conflict: High.[1]

Attacked by an unknown raiding force and population discovered butchered like livestock after Dentor.[2] Insufficient clearance to view data.[1]