The Air Caste (or Kor) is one of the five Castes of Tau Society, based around air and space travel and trade.[1]

The Air Caste is charged with holding the Tau Empire together through the Kor'vattra, the Tau Empire's merchant and war-fleet in addition to operating Tau Orbitals and Fortress Stations. Formerly functioning as messengers, these days they are the Tau Navy and are sometimes called the "Invisible Caste", for they rarely if ever set foot upon planets. Living in Orbital Cities, Tau of the Air Caste are the tallest and most slender of all Tau, with long, skinny limbs and hollow bones developed due to lives lived mostly in low- and zero-gravity ships and space stations. In the past, before the time of the Mont'au, the Tau that originally became the Air Caste had membranes stretching between their limbs, allowing them to glide on air currents. Tau pilots tend to be superior pilots compared to their human counterparts because they have a better depth perception and higher G-tolerance, but lack battle-experience compared to the best Imperial fighter-pilots.[1] 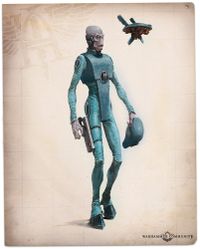 The Air Caste ranks from lowest to highest are:[3]

Notable Members of the Air Caste