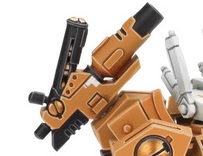 The Airbursting Fragmentation Projector launches a a proximity-fused explosive projectile, launched on a trajectory computed by an on-board drone intelligence, that calculate the precise height and distance from the other munitions to provide maximum effect.[1][2]

The munition is fired at a high angle and explodes directly above the target, negating the effects of any cover the foe might be using. The weapon has proved effective against swarms of Tyranids, including those with chameleonic properties. Another major advantage of the weapon is that it can be targeted on an enemy even if the user does not have a direct line of sight to it, due to its indirect fire trajectory.[2]