Alaitoc is an Eldar Craftworld known for its extensive use of Rangers. Related to this is the fact that Alaitoc is also a highly ordered Craftworld; many individuals choose instead the Path of the Outcast, becoming Rangers.

While all Craftworlds make use of the highly efficient sniper Rangers, none field or produce more than Alaitoc. By their nature, Alaitoc Rangers, known as the Starstriders[6a], do not reside upon the Craftworld, but travel the galaxy. These rangers retain their loyalty to Alaitoc, only returning to their Craftworld on occasion. Aside from the regular Rangers, Alaitoc is also the only Craftworld to field the highly skilled Rangers known as Pathfinders.[2] These highly trained snipers can cause havoc to the enemy. In times of need the Craftworld sometimes recalls their Rangers to contribute to Alaitoc's forces. Alaitoc can also call upon an unusually high number of Exarchs, as its Eldar are known to become utterly consumed by their chosen Path. This, however, causes many of its citizens to sate their extreme desires by becoming Outcasts, making Alaitoc closely connected to Eldar Corsairs throughout the Galaxy.[6a]

Alaitoc's symbol depicts the Sword of Khaine bisecting the Red Moon, the sigil of the House of Eldanesh, referencing the War Gods slaying of the Eldar hero.[6a]

It is said that by capturing its large numbers of Outcasts, the Imperial Inquisition has gleaned much knowledge of the Eldar through torture. This has increased tensions between the Imperium and Alaitoc, and the two are in a constant state of war.[6a]

The Craftworld is also known for its vicious war against the Necrons, begun when the Seer Council of Alaitoc saw the rise of Imotekh the Stormlord as a fulfilment of the Prophecy of Doom Arising from the Book of Mournful Night. Alaitoc eventually acquired an ancient crystalline map of every Tomb World in the Galaxy, though now only fragments remain. This map is used in conjunction with their network of Outcasts and Exodites to orchestrate a battle against the Necron menace.[10]

Despite the growth of Chaos following the Great Rift, Alaitoc continues to believe that the Necrons are the greatest threat to the galaxy. Alaitoc's foremost Farseer, Ylocu Shaie, sung of a sea of dead stars at the climax of a geometric disaster related to the Necrons. As such, they are closely aligned with the fiercely anti-Necron Masque of the Frozen Stars.[11] Alaitoc greatly fears the Pariah Nexus after first being warned of it by Ylocu Shaie.[15]

Unlike many other Craftworlds, Alaitoc has yet to become involved in the civil strife that has challenged their species following the emergence of the Ynnari. The Starstriders strong sense of loyalty has kept them more close-knit.[15] 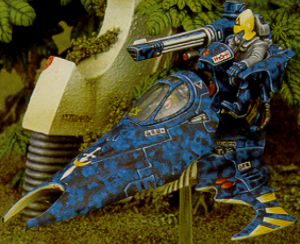 An Alaitoc Vyper armed with a Scatter Laser[4]