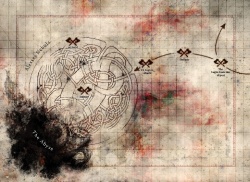 The Alaxxes Nebula is a region of space in Segmentum Solar.[1]

First entered onto Imperial charts by the 6th Expeditionary Fleet in 817.M30, the Alaxxes Nebula was initially regarded as nothing more than an impassable shipping hazard. The danger it presents lies in its unique chemical composition – highly corrosive ammoniac compounds combined with vast clouds of dust and hydrogen ice move in an ever-shifting labyrinth, shot through with passages many hundreds of kilometres wide. These clouds can overload the void shields of even the largest Imperial warships, leaving their adamantium hides exposed to rapid environmental degradation. Vessels straying into the outer edges of the nebula will suffer catastrophic hull breaches in under an hour, while ships tumbling out of control in the deep core can be lost within minutes. In addition to these physical dangers, the nebula is known to baffle sensors and limit vox communication. Ghost returns and false readings make mapping the interior difficult by any means other than physically traversing the clear passages, and such data is often outdated within a few years due to the natural shifting movement of the clouds.[1]

During the Horus Heresy, the Alaxxes Nebula was the site of a battle between the Space Wolves and Alpha Legion.[1]