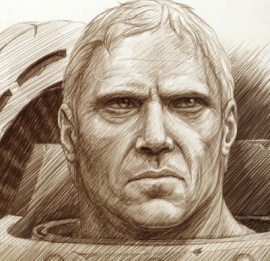 Alexis Polux was the Captain of the Imperial Fists Legion's 405th Company and the first Chapter Master of the Crimson Fists. He is described as a giant of a man, whose physical strength belied a cold, rational and supremely logical mind.[6] His character traits show the legacy of Rogal Dorn, Primarch of the Imperial Fists.

Alexis was born and raised on Inwit, the harsh Ice World that was also once the home of Rogal Dorn. He and his twin brother, Helias, were both selected as aspirants to the Imperial Fists, but Helias died during one of their final trials. After saving Alexis from the attack of a vicious predator, Helias was left dangling off the edge of a precipice, which the badly-wounded Alexis could not pull him up from. Rather than drag them both to their deaths, Helias released his grip. Alexis survived the trial and was eventually inducted into the Imperial Fists, but always believed that Helias, the stronger of the two, should have been the one to survive.[3a]

Throughout the rest of his life, Alexis would always labour under the belief that he was never as strong, or as qualified for leadership, as the most luminous of the Imperial Fists' officers, no matter how conscientiously he did his duty. However, this quality tempered his excellence as a commander with a humility that was lacking in many other Space Marines.[3x]

During the Great Crusade, Polux became one of Rogal Dorn's most senior captains, rising to his advisory council, the "Stone Men." When word reached Dorn of Horus's treachery, he dispatched a fleet under the command of First Captain Sigismund to the Isstvan system.[2] However, when Sigismund, on the advice of Euphrati Keeler, remained behind on Terra, command fell to Captain Yonnad.[3x]

Yonnad and several other senior officers were killed by the warp storms that becalmed the "Retribution Fleet" in the Phall system.[3x] Command fell to Polux, despite his internal misgivings.[3x]

Over the next several weeks, Polux refused the advice of his subordinates to attempt a breakout through the warp storms, insisting that they had to conserve their ships and manpower. Also, some instinct may have warned him that the storms were no accident, and the fleet had been lured into some kind of trap. For that reason, he relentlessly drilled his fleet in void combat and ship-to-ship boarding actions. This training paid off, as when the Iron Warriors' fleet, led by Perturabo in person, emerged from the warp, the Imperial Fists' fleet was ready for them.[3x]

The Battle at the Phall system was no easy affair for the Iron Warriors, despite outnumbering and outgunning the Imperial Fists. Perturabo expected the Imperial Fists to stand their ground and let themselves be torn down like the fortresses they were so fond of building, but Polux organised a "mobile fortress" strategy that had the Imperial Fists maneuvering around the Iron Warriors fleet and inflicting heavy damage on them, especially with ferocious boarding actions. On being informed by Captain Amandus Tyr that the Iron Warriors' flagship Iron Blood was among the attacking fleet, Polux made an unexpectedly bold decision that stunned his subordinates: ordering Tyr to assault the Battle Barge with a detachment of the Retribution Fleet and execute Perturabo. The battle was close to turning into a possible victory for the Imperial Fists, when an astropathic message arrived from Terra, bearing Dorn's personal orders to return to Terra at once. Faced with the choice of continuing the battle to its end, or ordering a retreat and allowing his straggling forces to be slaughtered, Polux felt he had no choice but to obey Dorn's orders. The Imperial Fists abruptly left the battle and jumped into the warp, taking heavy losses from the pursuing Iron Warriors.[3x]

Perturabo survived both the battle and the Imperial Fists' strike team, but took no satisfaction in the battle's outcome. The Iron Warriors had not won the victory, it had been handed to them, and during the first phase of the battle it had almost been denied to them - and not by Sigismund, who Perturabo had believed was in command, but by a "nonentity" like Polux. In the closing moments of the battle, Polux ordered most of the Imperial Fists complement of his cruiser Tribune to conduct a boarding action on Iron Warriors battle barge Contrador.[3x] Polux with his personal strike team was teleported on board the Contrador and after a furious battle managed to take control of the battle barge. He ordered the Navigators that came aboard from the Tribune to plot a course to Terra.

After some time spent in warp the Navigators reported that they have a lock on what seemed like the Astronomican.[3x] In the end it turned out to be a different beacon that led them to Ultramar. Polux and the remains of his company arrived to Macragge and were greeted in the Audience Hall by Roboute Guilliman who claimed that he remembered him. During his talk with Guilliman Polux claimed that he regrets not taking the battle against Iron Warriors to its victorious end.[4]

During his visit on Macragge he assisted the newly appointed Ultramarines First Master Phratus Auguston in construction of Macragge's defences. Auguston was from start prepared to claim the credit for implementing Polux's suggestions.[4] As Polux continued to review he met with loyalist Iron Warriors Warsmith Dantioch and after some time they became friends. Dantioch witnessed the fight between Polux and Konrad Curze in Chapel of Memorial and aided Polux with information obtained through the use of the communication array.[4] Later when he was unexpectedly transported by the Pharos array to Phratus and when it became possible to return back to Macragge he decided to stay behind and help Dantioch with his work.[4]

Polux later fought alongside Dantioch against the Night Lords attack on Sotha. The loyalists were victorious and Polux survived the battle, but Dantioch was mortally wounded after overloading the Pharos. Polux acknowledged Dantioch as his brother as the Warsmith died.[7]

After the Heresy and the formation of the Codex Astartes, Polux led the Crimson Fists. In their first action as a newly-created chapter, Alexis Polux and his forces came to the rescue of a small Imperial Colony founded upon Uralek Prime. During what is known as the Scourging of Uralek Prime, the Crimson Fists defeated a large force of Exodite Eldar who were attempting to destroy the colony. His masterful and stoic defense of the colony serves to this day as a tangible example to new initiates of the chapter.[Needs Citation]

Polux died eight centuries after the foundation of the Crimson Fists, during a battle for an unnamed system, codified as HR8518. He and his chapter were fighting a then-unknown alien race which are now referred to as the Scythians. These deviant Xenos warrior monks made war with venom-based weapons. He was struck by a poisoned projectile from such a weapon in the temple. He is said to have fought against the deadly poison for many days until his superhuman physiology finally succumbed to the poison. On his deathbed he imparted his plan to repel the Scythians from HR8518 to his warriors.[Needs Citation]

The Crimson Fists engaged the aliens after Polux's death in a short but extremely bloody campaign of xenocide from which the Scythians learned the true power of the Imperium. The xenos have since rarely engaged Imperial forces in open battle, preferring instead to mount stealthy raids and assassinations where their deviant, underhanded and dishonourable ways can prevail.[Needs Citation] 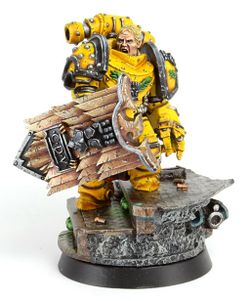