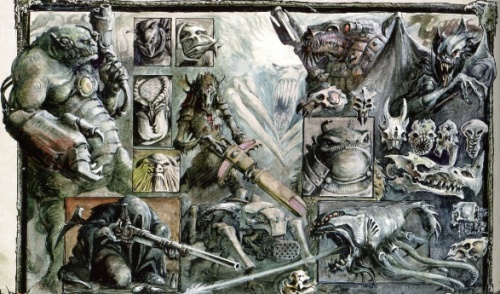 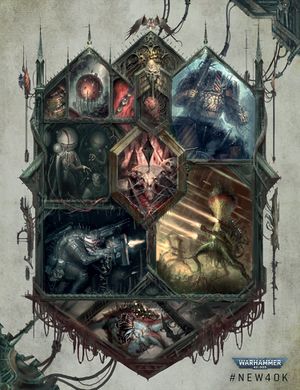 Xenos is an Imperial term synonymous with "alien" (from the human perspective), and refers to all non-human and extraterrestrial sentient species. "Xeno" is properly only used as a prefix. A xeno-artifact or xeno-technology, for instance, respectively, refers to an alien artifact or alien technology.[Needs Citation]

The major alien races are the Orks, Eldar, Dark Eldar, Tyranids, Necrons and the Tau. All these races pose a considerable threat to the survival and continued dominance of mankind. There are countless other races but all are trivial by comparison.[Needs Citation]

The Imperium considers humanity the rightful rulers of the whole galaxy. Part of the Imperial Creed is that all aliens judged to pose a threat to mankind's survival must be contained or destroyed. Aliens, along with mutants, heretics and deviants, are all considered enemies of mankind, for they threaten the very survival of the human race.[Needs Citation]

Although friendly dealings with aliens is almost unthinkable, Rogue Traders are allowed to barter and trade with aliens.[Needs Citation]

Despite all the fear and hatred, on certain occasions, short-termed military alliances have been established with the Eldar. These temporary alliances are somewhat uncommon but not unheard of. They are made against a common enemy like the forces of Chaos, Tyranids or Orks. The Imperial Navy, units of the Imperial Guard, and even detachments of Space Marines have, on certain occasions, fought beside Eldar forces. A fine example for this is the Gothic War, during which the Imperium allied itself with the Eldar of the An-Iolus Craftworld against the forces of Abaddon the Despoiler. No temporary alliances with the Tau have been made, but short-termed truces have happened.[Needs Citation]

Some human organisations, including some factions of the Inquisition, individual Navigator families, the Illuminati brotherhood, etc., even have certain secret dealings and alliances with the Eldar. All these agreements are carefully guarded secrets, as they would be considered treason by other more conservative factions of the Imperium. One such pact is the Coven of Isha.[Needs Citation]

Certain individuals, like Captain Gabriel Angelos of the Blood Ravens have had friendlier contact with certain Eldar. The Blood Ravens Chapter in particular has had unclear contacts with the Eldar throughout its history. This is, for obvious reasons, kept secret by all parties involved. Ironically, the secrecy surrounding the Blood Ravens' actions with the Eldar could possibly be one contributing factor to the Chapter being largely unaware of its history.[Needs Citation]

Unlawful friendlier contact on a larger scale can happen, as some Imperial governors simply ignore Imperial law if the potential rewards are great enough and will trade with some xeno-races. Many items of xeno-origin are smuggled into and within the Imperium. Exotic weapons, tomes of knowledge, poisons, certain xeno-devices to dispose of one's rivals, etc., seem to be craved by certain members of the jaded elite and commonly used in some quarters. A known example is the Jokaero death spider, which uses zarthax, one of the deadliest poisons in the galaxy[1]. Certain Imperial factions use xeno-weaponry on occasion.[Needs Citation]

Some governors have even hired alien mercenaries to maintain their grip on power.[Needs Citation]

The Tau deliberately foster such developments, trading with nearby Imperial systems and preaching the ideals of the Greater Good. As a result, a very small number of Imperial governors on the frontiers of the Ultima Segmentum have recently seceded from the Imperium, pledging their allegiance and the loyalty of their respective worlds and star-systems to the Tau empire.[Needs Citation]

The relationship between particular alien races and Chaos varies from case to case. Some are by their nature completely immune, such as the Necrons. Others, such as the Tau, appear to be largely immune to Chaos corruption, although much of this immunity is of social nature. Others have been completely corrupted. Races influenced and corrupted by Chaos include the Bale Childer,[3] Yu'vath,[3] Saruthi,[4], Grell[8], and Xenarch.[5]