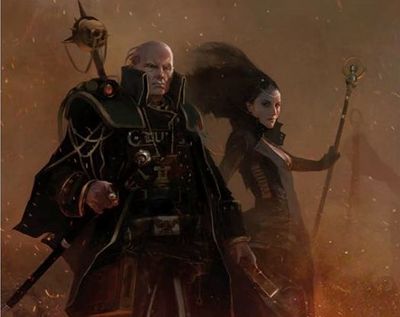 Gregor Eisenhorn and Bequin during the prosecution of Pontius Glaw.

Alizabeth Bequin was an associate of Inquisitor Gregor Eisenhorn. She was born on Bonaventure in 210.M41 and died on Durer in 386.M41.[2a]

Bequin joined the Inquisitor's team on the planet of Hubris while he was searching for the mass-murderer Murdin Eyclone, who had killed 12,142 citizens of the planet in a failed attempt to resurrect Pontius Glaw. At that time, she had been working as a pleasure girl in the Sun Dome for four years under the pseudonym of "Lyse B". She came to Eisenhorn's attention during a raid on a suspected cultist hideout, when she saved his life by killing his would-be attacker.[2a]

According to Bequin, she had been an outcast for most of her life, and not particularly successful in her latest profession. Eisenhorn, a psyker, was quickly able to discern the reason: she is a Blank, a staggeringly rare attribute that nullifies the effects of psychic or daemonic effects in her vicinity. This aura had the unfortunate side effect of making her naturally repellant to most other humans, including non-psykers, despite her outstanding beauty. Eisenhorn himself was repulsed, but quickly saw the value of having a Blank in his entourage, and offered her temporary employment.[2a][2b]

She quickly proved to have a talent for undercover operations, posing as Eisenhorn's spoiled wife when he infiltrated House Glaw posing as a wealthy merchant.[1c] When the ruse was uncovered, she also proved to be tough and cool-headed in many difficult situations, including escaping from a gladiatorial arena when Eisenhorn and his team were meant to be slaughtered by a Carnodon, and in combat with House Glaw and its retainers, including the Chaos Space Marine Mandragore of the Emperor's Children.[Needs Citation]

Before embarking on their final confrontation with House Glaw, Eisenhorn gave her the chance to back down, and was impressed when she refused, determined to see the matter through to the end. In her spare time, she received weapons training from Godwyn Fischig, and was competent and cool-headed with dual laspistols by the time of the final battle. Eisenhorn was impressed by how far she had come in the few weeks since he had met her, and by the end of the Necroteuch affair, she was a permanent member of his team.[Needs Citation]

Eventually Eisenhorn employed more Blanks and formed them into an organisation called the Distaff, led by Bequin.[Needs Citation]

The Distaff was eventually all but wiped out by mercenaries, although Bequin and a few other blanks managed to survive. Later, Bequin suffered an embolism brought on by the extreme stress caused by trying to use her anti-psychic ability on the Chaos Titan Cruor Vult. She was put onto life support, with recovery not expected.[Needs Citation]

In 461.M41 the ship holding her stasis tube went missing during a routine jump. Most probably around the same date, Alizebeth Bequin was reborn on the planet Sancour (Sector Scarus, Subsector Angelus) and specifically in the Hive City of Queen Maab (southern emisphere of Sancour, prefecture of Hercula). The Cognitae somehow retrieved Bequin's original genetic material in order to produce a quasi-clone of her.[2b][2c][2d]

The new Bequin was raised as an orphan in the Scholam Orbus in Queen Maab. She was then selected to enter the adjoining facilities of the Maze Undue. The latter was a Cognitae-run training facility for psychic blanks where masking, covert operations, weapon training and the best use of the pariah trait were taught.[2e][2f][2g]

Once the Maze Undue was razed by Inquisitorial agents led by Inquisitor Gideon Ravenor, Bequin was sold to the local Ecclesiarchy who intended to conduct experiments with her. Heretical memebers of the Ecclasiarchy, with the aid of elements of the Word Bearers Chaos Space Marines, seemingly succeded in using Bequin to speak Enuncia without her being harmed in any way. Thanks to the intervention of Inquisitor Gregor Eisenhorn, she successfully fled before any further steps could be done through the project. She was finally brought to the house of Alace Glaw where an Emperor's Children Chaos Space Marine named Teke "The Smiling One", wanted to use her to find an access to the City of Dust. This fabled city was in reality a twin of Queen Maab but set into another dimension and a first attempt to open a stable passage through the Immaterium much like the Eldar Webway. [2b][2c][2g][2h] After evading multiple foes, Bequin was freed from Gideon Ravenor's activity by Cherubael and agreed to work with him to hunt down the mysterious King in Yellow.[2i]