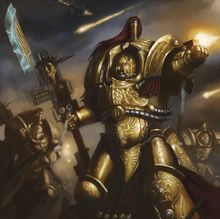 A squad of Allarus Custodians

Allarus Custodians are members of the Adeptus Custodes whose task is to kill key figures within the armies of the Imperium's enemies and eliminate key targets.

These relentless hunters are encased within Allarus Terminator Power Armour, with comes equipped with Teleporters that allow the single-minded Allarus Custodians to quickly close with their selected targets.[1][2] The standard armament of an Allarus Custodian is a Castellan Axe and wrist-mounted Balistus Grenade Launcher.[3]

Hand-picked by the Captain-General from amongst the most bellicose of their order, Allarus Custodians relish the chance to plunge into the most lethal battles. Their killer instincts are razor- sharp, their wrath honed to a fine point. Yet these are no maniacal berserkers. Where many of the galaxy’s most dangerous close-combat specialists allow their rage to drive them, Allarus Custodians leash their aggression wholly to their will. They land every blow with murderous strength, but also with surgical precision. So aggressive and heroic are these warriors that, when the situation demands, they have been known to splinter their units entirely after the initial strike and scatter through the enemy’s rear lines. Fighting as lone figures, the Allarus Custodians eliminate key targets, sow anarchy and confusion through unsuspecting forces, and completely destabilise the foe’s formation before fresh Adeptus Custodes forces arrive to end the conflict.[3] 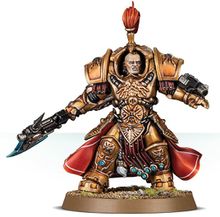 Allarus Custodian with a Castellan Axe