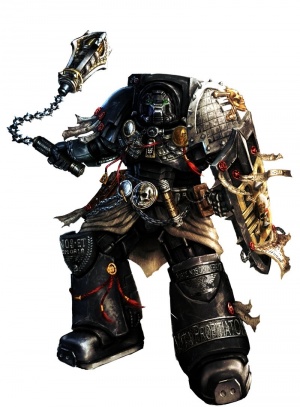 Alric is a Knight-Warden and Black Shield of the Deathwatch.[1]

In a brotherhood of secret-keepers and vigilant sentinels against the darkness, the Black Shield known as Knight-Warden Alric is, himself, a mystery come forth from the depths of the void. The Battle-Brother has proved to be indispensable to the Dead Cabal's goals, an unexpected source of wisdom concerning the Dark Pattern and the beings that may have created it. In particular, the Knight-Warden has provided the Dead Cabal with nearly prophetic insight into the working of the Suhbekhar Dynasty, his knowledge of the Necrons rivaling even that of Xerill. How the reticent Battle-Brother came to know such things about the newly awakened foe remains a mystery.[1]

Unlike Mathias, Xerill, or Rennin Tri'el, Alric was a Battle-Brother of the Deathwatch for naught but a day before he sought out Inquisitor Ramaeus by name and pledged his assistance to the Dead Cabal and their search for answers beyond the stars. Even the Knight-Warden’s arrival at Watch Fortress Erioch defies explanation. He arrived, unheralded, aboard an unmanned Shark assault boat which had been filled to the gunnels with fuel for its plasma drives. As the ship possessed no capacity for Warp translation, such a journey must have taken centuries from even the nearest system and its engines had long since run cold. Found seated on the command throne, clad in his unadorned suit of steel colored terminator armour and deep in a state of self-induced suspended animation, Alric was taken to a holding cell on the outskirts of the Watch Fortress. Urged awake by chem-stimulus and psychic insistence, the Knight-Warden’s first words were not of confusion or distress, but of firm acknowledgement. He insisted that he be brought before the Chamber of Vigilance and that Inquisitor Ramaeus would know of his urgency. Under close guard, Alric was granted the audience he requested. What the Black Shield divulged to the Chamber of Vigilance or what connection he has to the Inquisitor is unknown, though his brothers among the Dead Cabal have postulated a number of theories. Whether or not their guesses have come close to the mark, Alric remains silent on the matter. Despite his speculation, it is certain to all that the Chamber of Vigilance is satisfied with the Knight-Warden’s account of himself and that they are convinced that his purpose is righteous. The Black Shield emerged from that council as a Battle-Brother of the Deathwatch and was immediately set to active service under the direct purview of Inquisitor Ramaeus herself. He has since made no account of his past or his Chapter, making no mention of where he came from or why he sought out the Deathwatch. If pressed, the taciturn warrior states only that his way was guided by the will of the Emperor.[1]

Since taking the Long Vigil, Alric has laboured tirelessly to make safe the Jericho Reach from the horrors that rise from the depths of aeons past. While Mathias shepherds those newly sworn to the Long Dead Vigil and Xerill and Rennin Tri’el endeavour to learn ever more about the lost worlds of the Jericho Reach, the Knight-Warden takes it upon himself to stand as a bulwark against the darkness. Given operational discretion to roam the stars alone, Alric acts as a roving knight-errant, confronting evil where he finds it and safeguarding those who fall victim to the eldritch horrors of the Dark Pattern. During his tenure among the Deathwatch, the mysterious Battle-Brother has earned a reputation for arriving, unexpectedly and without warning, where he is needed most. The members of no less than a dozen Deathwatch Kill-teams owe their lives to the silent warrior, each facing insurmountable odds only to find salvation in the arrival of the Knight-Warden, his head bowed in silent salute and his power fl ail swinging. Not even his brothers within the Dead Cabal can say how the Knight-Warden knows where he is needed, though the unquestioning certainty with which he conducts himself defi es the notion that his actions are without direction. The Black Shield, himself, offers little by way of explanation, only that he walks the road of fate, its winding course laid out in a time long-distant.[1]