"Men crave food. They crave flesh, they crave power. We are not men, the Emperor's Angels. His Space Marines crave honour, they crave retribution, they crave justice. We are not angels. We are the blood-sons of Sanguinius. We crave only violence, bloodshed. There is no void in the deep of our souls, only the hunger — an insatiable call to slaughter." 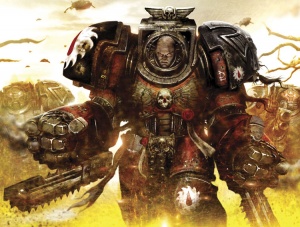 Nassir Amit[3a], also known as "the Flesh Tearer", was the Captain and Dominion of the Fifth Company of the Blood Angels Legion during the Great Crusade and the Horus Heresy.[1] Following the Heresy, Amit became the first Chapter Master of the Flesh Tearers.[2]

Nassir Amit was one of the first members of the IXth Legion, which in time would become known as the Revenant Legion for their barbaric practices such as consuming their own dead. A scion of a toxic bloodline in Boeotia, he was a quasi-Mutant that would have been executed by any other Legion. Instead he was reformed into a Space Marine and took the name Nassir Amit from an ancient Himalayan play. After his ascension he fully took part in the brutal practices of his Legion, executing captured enemy soldiers and consuming them alongside his fallen brothers.[9b]

All of this changed with the arrival of Sanguinius, who pledged himself to his sons regardless of what path they may take. Under Sanguinius' guidance, the Revenant Legion was reborn into the noble Blood Angels and abandoned its barbaric practices. However Nassir continued to display much of his Legion's former behavior, becoming a famed champion in the gladiator-pits of the World Eaters. When his chain-brother Kargos Bloodspitter was challenged to a fight to the death by two World Eaters champions, Nassir defended his brother and struck down his foes in the presence of Sanguinius and Angron. Sanguinius allowed the bout to take place, but expressed disappointed with Nassir in the aftermath and instructed him to eat the brains of the two World Eaters he had slain. The act secretly shamed Nassir.[9b]

Amit and the Fifth Company partook in the joint Blood Angels/Luna Wolves assault on the Nephilim on Melchior.[1c] Later, Amit accompanied his Primarch Sanguinius, First Captain Raldoron, and Captain Thoros to the Council of Nikaea, where Amit was commanded to stand sentinel in the Great Angel's quarters. When the Emperor of Mankind issued the Edict of Nikaea, Amit, who was staunchly pro-Librarian, suspected that it was because Sanguinius feared that Amit would try to argue with the Emperor. When Raldoron returned to the Blood Angels quarters, Amit argued with Raldoron that commanding the Librarians to never again use their powers was a mistake, and expressed concerned about how they were to be reintegrated. Sanguinius entered and assured Amit that the Librarians still be welcomed in the Blood Angels ranks, but that the Emperor's word was law, and the Edict of Nikaea was to be followed.[1a]

At some point during the Great Crusade, Nassmir Amit fought Kharn of the World Eaters on a desert planet that both their Legions had conquered in a joint action. Both fighters were badly wounded in a brutal duel in a trench using axes and cleavers.[4]

Amit and the Fifth Company later joined the joint Blood Angels/Alpha Legion operation in the Kayvas Belt fighting the Orks.[1b] Following the campaign, Amit and the Fifth accompanied the rest of the Blood Angels Legion in their campaign in the Signus Cluster. After rescuing Squad Cassiel on Holst from strange hostiles,[1d] Amit began to have concerns that the Blood Angels had been lead into a trap. Having been aware that Raldoron's adjutant, Mkani Kano, had been seeking out his former brothers in the Librarius, Amit approached the former Librarian and offered to help him.[1e] After the Red Tear had crashed on Signus Prime and the Dark Page under Chaplain Tanus Kreed of the Word Bearers fled, Sanguinius called a meeting of the Council of Angels, Amit finally spoke what he had feared: Warmaster Horus Lupercal had lead the Blood Angels into a trap. The words had barely left his lips when Sanguinius struck Amit in the chest with the pommel of his sword and demanded Amit recant his statement. Though clearly shocked at his Primarch's outburst, Amit stood by his accusation. He was only spared censure when Helik Redknife of the Space Wolves revealed that Primarch Magnus of the Thousand Sons had violated the Edict of Nikaea.[1f]

During the Battle of Signus Prime, when Sanguinius was wounded by Ka'Bandha, the Blood Angels fell to the depths of rage, and Amit and some of his warriors succumbed to the Red Thirst. In the throes of the rage, Amit and his brothers descended upon Redknife and his Wolves, killing them.[1g] Following the battle, Amit revealed what he had done to First Captain Raldoron, and submitted himself to punishment. However, Azkaellon, the Commander of the Sanguinary Guard, prevented him, and Raldoron revealed that Azkaellon had already lied to Sanguinius about the Wolves deaths. Amit nearly came to blows with the Guard Commander, but Azkaellon explained that if Sanguinius knew what had happened, he would blame himself and tell Leman Russ the truth, risking the bonds between the Legiones Astartes at a time when unity was needed. Amit asked how he was supposed to ease the pain in his heart, and Azkaellon told him that it was the burden he must bear.[1h] 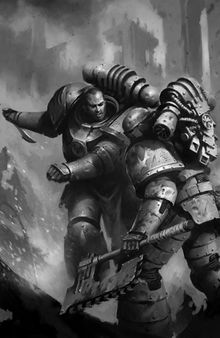 During the Siege of Terra, Nassir Amit took part in the defense of the Inner Palace. During a defense of a refugee convoy, Nassir met his former chain-brother Kargos and cut his throat after telling him to simply eat shit, though this failed to kill the World Eater.[9a] Later Nassir was one of the sparse number of defenders at the Eternity Gate, holding off a massive Chaos horde. During the battle he again came to blows with Kargos, again telling him to "eat shit" and striking down his former brother.[9c]

Following the Heresy, Amit became Master of a Chapter of the Second Founding, which bore his epithet Flesh Tearers.[2] With the death of Sanguinius Amit and his followers gave into their resentment and hatred, unleashing bloody rampages against the traitors as they retreated from Terra. He later lead the Flesh Tearers to conquer Cretacia and take the planet as the Chapter's new homeworld.[3b] Amit became obsessed with Cretacia, believing it to be the manifestation of the Flesh Tearers' own nature, hoping that if he could tame its peaks he could temper the edges of his own fury.[8]

Amit's final fate is unknown, as he left Cretacia aboard a ship which vanished at the edge of the system.[7b] Following that, he was never seen alive and his body was never found.[7c] Eventually, his successor, Gabriel Seth, found Amit's helmet in a reliquary aboard an ancient Flesh Tearers vessel, dated to the time before the Second Founding, which had become part of a Space Hulk that had materialised at the edge of the Corythos System.[3c][7c] After viewing the images contained in the helmet's cogitators, Seth fell unconscious and the relic was destroyed by Harahel. Amit's helmet showed Seth a universe of blood which he referred to simply as "the end...".[7d]

Nassir Amit was notorious among the Blood Angels for both his savage and brutally honest nature. The Primarch Sanguinius valued his honest nature, as Amit would always speak the truth, even when others would be stopped by decorum.[1a] His savage aspect in battle was also known, to the point that he was dubbed "the Flesh Tearer" by his battle-brothers. Far from denying the epithet, he embraced it,[1b] arming himself and his brothers in the Fifth Company with custom serrated flaying knives.[1c] Amit did what he believed to be right, even if went against Legion law, having little fear of the Wardens.[1e]

As Captain of the Legion's Fifth Company, Amit wore a suit of Artificer Armour[1b], while in combat he used a custom made power sword[1h] and flaying knife[1g] with barbed edges, the source of his epithet.[1h]

As Chapter Master of the Flesh Tearers, Amit wore a suit of Terminator Armour, utilizing a pair of Chainfists with integrated Storm Bolters.[3c] Amit was notably the only Chapter Master of the Flesh Tearers to wear Terminator armour; it was believed by Chaplain Appollus that Amit's successors saw it as a prison, not allowing them to slake their thirst for bloodshed.[7b]

As both Captain and Chapter Master, Amit tended to ignore cosmetic damage to his armour, leaving bullet marks and blade scars as they were, a habit which annoyed his fellow Blood Angels and even some of his fellow Flesh Tearers.[1b][3c]