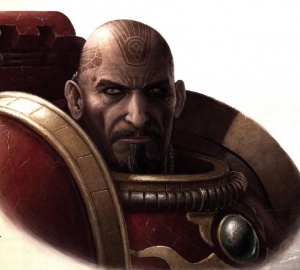 Amon was the Captain of the 9th Fellowship of the Thousand Sons Space Marine Legion during the latter stages of the Great Crusade. A senior member of his Legion and commander of the Order of Blindness, he was also the Equerry to its Primarch, Magnus the Red, and had served as Magnus' mentor and tutor when the Primarch first arrived on Prospero.[1a] A somewhat secretive and mysterious Astartes, Amon survived not only the battles of the Great Crusade, but those of the Horus Heresy as well, eventually becoming a member of the Cabal of Ahriman, vanishing from recorded history after Ahriman's exile.[1][2]

Amon was a native of Prospero, a leading member of the citizenry of the Tizca commune during the time of Magnus' arrival on the world. Because of this he became tutor to Magnus, teaching him all he knew of Prosperine culture, philosophy and psychic discipline. Magnus' abilities were so great, however, that the primarch outclassed his tutor within a year of study. Amon still proved indispensible to Magnus' development however, being the first to grasp the implications of what Magnus percieved during an epiphany into the nature of creation and helping record, guide and develop this way of thinking. During field study of this chaos theory, or chaos magic, Amon was present when a massive psychneuein attack fell upon the scholarly party. It was as a result of this attack, and thier previous study, that several of the scholars were able to access previously unknown psychic powers and fight off the threat. Amon developed powerful prescient visions and intuitions, discovering that he was a prodigeous precognitive psyker. In the days that followed, the survivors of this incident were guided by Magnus into setting up schools of thought designed to explore, document and ehance their psychic abilities; the Cults of the Thousand Sons. Amon became the first Magister Templi of the precognitive school[1a], later termed the Corvidae. The next time Amon appears in recorded history, he was neither an ordinary Prosperine or a Magister Templi. It is unknown when, or why, but by the closing years of the Great Crusade Amon had ceded his role as Magister Templi to the Terran Astartes Ahzek Ahriman, but was himself a Space Marine, ranked as 9th Fellowship Captain.[1]

Little is known of the bulk of Amon's career as a Legionary of the Thousand Sons, at least some of which is likely intentional on his part. For Amon was the Master of the Hidden Ones, the mysterious Scout Auxilia of the legion and himself completely adept at appearing undetectable. Even such a psychic master as Ahriman had trouble sensing Amon's presence with either mindsight or even true sight.[1b] Magnus himself described Amon as a "quiet, solitary" figure, interested in "the hidden nature of things" and a "student of the unknown".[1c]

As Equerry, Amon appeared to be responsible for his primarch's security and officiating certain rituals, amongst other duties.[1b] He is known to have been present at most events and locations Magnus visited, including the Triumph of Ullanor.[1c] Contradictory accounts exist of his presence and actions at the Council of Nikaea exist[3] (see Notes).

Amon appeared to go along with Magnus' decisions after the Council of Nikaea without any of the disquiet experienced with some others of the senior Captains, aiding Magnus in his various sorcerous rituals designed to pierce the veil of the future and protect Horus from Chaos, sharing responsibility for the death of the remembrancer Kallista Eris as a result. The confidence he placed in his primarch was shaken at his discovery that Magnus had slain Captain Uthizzar as part of his scheme to offer the Thousand Sons up for their approaching punishment unaware of what was to happen, and further damaged when Magnus, taking him into his confidence as his oldest friend, fully explained to him what had happened, and was to happen. Amon angrily rejected Magnus' belief that the legion should passively wait to die, instead urging that they strike first, and strike hard. When Magnus urged him to do no such thing, Amon stated that he would fight for his home and that he expected his oldest friend to do the same.[1d]

Despite this strain in their relationship, Amon carried out his primarch's supposed final wish, in delivering the Book of Magnus to Ahzek Ahriman in the last moments of the Thousand Sons' existence as an Imperial legion. This action allowed Magnus to cast his master teleportation spell, transporting the surviving Thousand Sons - Amon among them - to the Planet of Sorcerers. In the time that followed, Amon would eventually turn his back on Magnus even more and join the coven of Ahriman, helping the Sorcerer Lord cast his own great master spell.[1e] Amon is known to have been cast out of the legion alonside the rest of the coven in the aftermath of this action[2]

Amon nonetheless continued to reside on the Planet of the Sorcerers but was too fearful to venture into the Obsidian Tower and confront Magnus himself. He was still aware of the Primarch's deterioration due to his form having been broken into multiple shards, and aided Ahriman in finding the location of the shards by using a ritual to temporarily transform into Magnus. However the ritual mimicked Magnus' wounds on Prospero, and Amon's spine was shattered. Not even the works of the Pavoni could fully heal him, and the rest of his existence was one of constant agony. While Ahriman and his Cabal sought to restore Magnus and find the shards, Amon attempted to keep the increasingly senile "primary" Magnus on the Planet of the Sorcerers under control. Amon ultimately had to try and find Magnus when he went missing on the planet, the process taking many years due to the vagaries of time in the Eye of Terror.[5]

Later during the Siege of Terra Amon was part of a group which included Magnus, Ahriman, Menkaura, and Atrahasis that infiltrated the Imperial Palace to recover a lost shard of the Primarch.[6] After learning the Shard was now beyond his reach, Magnus instead sought to kill the Emperor upon the Golden Throne. In the subsequent battle before the Throne the Thousand Sons were confronted by Vulkan, his Draaksward, and the pack of Bodvar Bjarki. During the battle Amon was badly wounded and required extensive treatment by the Pavoni.[6a]

After Amon's exile he started up his own warband called The Brotherhood of Dust. This warband mainly consisted of exiled Thousand Sons but not entirely. His aim was to ease the pain of the Legion that the Rubric of Ahriman had caused by destroying the legion. In order to destroy the Legion he needed to reverse the Rubric then kill them and in order to do that he needed Ahriman's knowledge of it. He sent out emissaries over the entire galaxy chasing up rumors that could possibly be Ahriman. Along the way he found other members of the Thousand Sons and the emissaries were ordered to ask them to join. If they accepted they would be among the other members of The Brotherhood of Dust but if they refused however they would be killed and the army they were with. They eventually did find Ahriman hiding with the Khorne dedicated Chaos warband called The Harrowing. The emissary sent was a former member of the Thousand Sons and a former member of Ahriman's Cabal, Tolbek. When asking the master of The Harrowing; Gzrel if he had seen Ahriman he replied that he did not know his location. Just before leaving Tolbek realised Ahriman was their but under the false name Horkos. Tolbek then followed procedure by asking to join him but Ahriman refused. After a massive psychic battle Ahriman emerged victorious and everyone but him and a Harrowing member by the name of Maroth was killed. Before the ship Tolbek came on relised Tolbek was dead Ahriman had taken over the ship and fled using warp travel.

Amon sent numerous things to try and kill Ahriman such as warp beasts and a half Daemon Prince but were all defeated. However despite all of Amon's efforts of tracking him down Ahriman came to him but was blended into Amon's massive fleet. Before attacking Amon the mistress of the ship Ahriman was on betrayed them and reviled his location. After a battle with 3 Chaos Sorcerers Ahriman was again victorious but was badly wounded. Amon himself came onto the ship and took Ahriman to his flagship the Sycorax. There he convinced Ahriman to give the information he desired to him and left him for dead in his prison. Ahriman's allies then came to rescue him and they started to flee. Ahriman however ordered them to stay and they versed several sorcerers and emerging victorious. Amon then came and versed Ahriman in a duel to the death. Ahriman then won by unleashing the rubric that flowed through Amon and made his flesh into dust. Ahriman also took his armor for himself. In doing that he became the new leader of The Brotherhood of Dust gaining it's fleet and army for himself.[4] 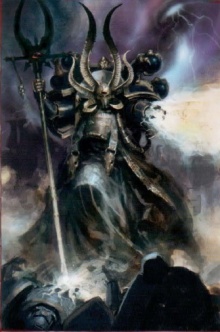 Amon is described as having grey hair, close-cropped, and skin the appearance and colour of old vellum. His precognitive powers developed at a young age, although they manifested as dreams rather than conscious visions. Amon's first precognitive vision was of his home city in flames and darkness, a recurring nightmare that plagued him for many years, until the coming of Magnus stilled it. Tragically, he later realised that he had forseen the Burning of Prospero.[1d]

Amon gained new armor after his exile. It was said he had a horned helm and blue robes. Ahriman took his armor after his death so the armor he wore in his exile from the Thousand Sons was this [4] 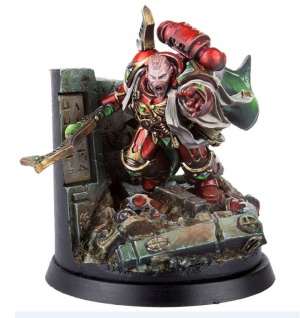