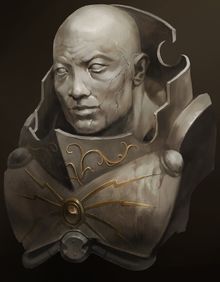 Amon Tauromachian was a member of the first circle of the Legio Custodes during the Great Crusade and the Horus Heresy.[1b] He was regarded as one of the greatest members of the Custodes.[1b][2]

Amon was present at the Ullanor Triumph, manning a checkpoint alongside fellow Custodes Haedo Venator and seven members of the Silent Sisterhood. Primarch Magnus of the Thousand Sons was impressed by Amon's ability, predicting that there were 'great things ahead for [him]'.[2]

He was also present at the Council of Nikea. He was one of a group who explained to the skjald Kasper Hawser that he was a spy sent by the Thousand Sons to infiltrate the Space Wolves.[3a] He was then assigned to guard Hawser and explained the significance of his name.[3b] However, at that point he was being controlled by a Daemon posing as Captain Amon of the Thousand Sons, the similarity in their names making the task easier. The level of control the Daemon had over him meant that he was unable to take part in the subsequent fight, a fact that he regarded as failure.[3c]

At some point during the Horus Heresy Amon took part in a Blood Game. Ten months after it began he was able to infiltrate the Imperial Palace and came within striking distance of the target, presumably the Emperor.[1a] He then took on an assignment to investigate Pherom Sichar of Hy Brasil, who was suspected by the Custodes of being a traitor to the Imperium. He was about to arrest Sichar when Rogal Dorn intervened and revealed that Sichar was a double-agent working for the Imperium, but had now had his cover blown. Amon suggested that all Imperial organisations should share information to stop this happening again.[1c] One of Sichar's bodyguards - a Lucifer Black — was a real agent of Horus and detonated a bomb that killed Sichar. He then attempted to set off another bomb that would destroy the Planato, but Amon was able to stop him.[1d]

During the Siege of Terra Amon was tasked by Constantin Valdor with investigating supposed Daemonic activity within the Imperial Palace. His investigation led him into the refugee camps of the Inner Palace, where he met Euphrati Keeler.[5] Amon expressed great distrust for the future Saint and her followers, but was ultimately told by Malcador to tolerate their presence in order to potentially use their faith in order to combat the powers of the Warp.[5a] However the Nurgle Daemon Cor'bax Utterblight was unleashed into the palace, heralding with him a swarm of Possessed Imperial cultists. With the aid of Keeler and Malcador, Amon was able to defeat Utterblight. For his works and future status as a warden of Keeler's Cult, Malcador recommended that Valdor award Amon a new name, Longinus.[5b]

Later in the Siege, Amon was assigned to oversee Keeler as she resumed her role as a Remembrancer and interviewed the infamous criminal Basilio Fo. When Fo revealed a contagion capable of killing not only the traitor Primarchs but all Space Marines, Amon agreed with Keeler's assessment that the data should be provided to Rogal Dorn.[6] Later Amon and Keeler again meet with Fo, this time recording everything he will say regarding the transhuman virus.[6a]

Like all Custodes, Amon Tauromachian's name was formally awarded to him and grew longer as he successfully completed more assignments. His full name (as far as it is known) is written below, complete with a explanation of what each component signifies.[1b]