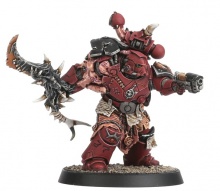 The Anakatis Kul were warriors used by the Word Bearers during the Horus Heresy.

Created by the Crimson Apostle Zardu Layak, the Anakatis Kul were volunteers who were given the Anakatis Blades, ancient weapons that date back to before humanity. If the warrior was strong enough to master the blade and the beast within they would gain supreme power, however those which did not fell became little more than slave to their sword.[1]