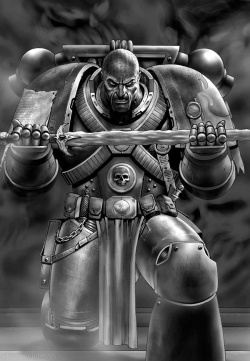 An anathame was a unique sword-like weapon produced by a xenos race called the Kinebrach. Several came into the possession of the Interex, where they were encountered by the 63rd Expeditionary Fleet of the Imperium during the Great Crusade.[1a]

At first glance, an anathame was a simple knife or sword with a napped flint blade and golden hilt. The weapons appeared to be semi-sentient, as the Interex claimed the weapons could be instructed to recognize a particular person, which gave them the ability to mortally wound that person. The Interex did not know how to produce these weapons, but had confiscated them from the Kinebrach.[1a] At least one was on display at the Hall of Devices on Xenobia Principis on the Xenobia planet. When Word Bearers First Chaplain Erebus stole it and destroyed the Hall, the Interex accused Warmaster Horus's party of the crime, sparking the Battle of Xenobia Principis.[1b]

Erebus took the anathame to the moon of Davin and gave it to the already Chaos-tainted governor Eugen Temba. When Horus led the 63rd Expeditionary Fleet back to Davin to return it to compliance, he confronted Temba on the moon. When Horus would not side with him, Temba spoke his name to the anathame and attacked with an agility that could not have come from his bloated, decaying body, driving the blade through the Warmaster's left shoulder before Horus slew him.[2]

Had it been any other weapon, Horus would have survived and healed normally, but the anathame had his name and Horus's Astartes physiology could not heal its wound. The Mournival brought him to the medicae deck aboard the Vengeful Spirit, where Apothecary Vaddon determined that Horus's Larraman Cells were not functioning, preventing Horus's shoulder wound from clotting. Vaddon told Garviel Loken that he might be able to save Horus if he could examine the weapon which wounded him, So Loken, Tarik Torgaddon, Nero Vipus, and the members of Locasta Squad went down to the surface of Davin's moon to search for it.[2]

The search party found the anathame and brought it to Vaddon, with Loken giving him explicit orders not to mention its existence to anyone. Fabius Bile presented the Warmaster's Seal to Vaddon and took the anathame from him, delivering it to his primarch Fulgrim.[2] Shortly before the betrayal at Isstvan III, Fulgrim used the anathame to kill Commander Vespasian.[4a] He later used it to kill remembrancer Ostian Delafour in his studio, impaling him through a painstakingly-sculpted statue of the Emperor. Fulgrim left Ostian and the anathame, where Serena D'Angelus would later kill herself on the protruding blade.[4b]

Before the Battle of Calth, Erebus broke eight shards from the blade and forged them into athames. He gave seven of them to the commanders of the Word Bearers Host on Calth: Kor Phaeron, Morpal Cxir, Foedrall Fell, Hol Beloth, Quor Vondar, Phael Rabor, and Kolos Undil.[5] The anathame returned to Fabius's possession and he learned how to influence its sentience. When Felix Cassander broke free of his restraints and attacked him in his vivisectorium, Fabius took the anathame and named him to it, striking a glancing blow to Cassander's shoulder. Instead of dying, Cassander was wracked with pain beyond that which Fabius had ever inflicted upon him.[3a] Fulgrim brought the anathame with him to Iydris, a Crone World at the heart of the Eye of Terror, and used it to ascend to daemonhood in accordance with an Eldar prophecy regarding the Angel Exterminatus.[3b]