Symbol of the Angel's Tears

The Angel's Tears, also known as the Erelim, Broken Blade, Silver Masks, or Dead Hand, were warriors of the Blood Angels during the Great Crusade and Horus Heresy.[1a]

These Jump Pack-equipped infantry were known for the cruel devastation that they brought to the foe. Each individual warrior bore the title Erelim and served as Sanguinius' wrath set forth by his will to scour away those he decreed unworthy of being saved. They were among the most commonly seen warriors of the Innermost "Sphere" of the Legion, serving the role other Legions refer to as Destroyers.[1a]

Befitting their dark duty, they wore silver death masks etched with oats of retribution. As with the other warriors of the First "Sphere" of the Blood Angels, such as the Sanguinary Guard and Crimson Paladins, the Angel's Tears forsook their old names and identities and took up new ritual titles, symbolic of their new roles as true Angels of Death. Angel's Tears were said to eventually return to normal Legion service, removing their death masks and taking up their old names. This was to distance them from the death and slaughter they caused while in service as the Angel's Tears.[1b]

The Angel's Tears took to the field only at the direct order of Sanguinius himself, only when the complete destruction of an enemy was deemed necessary. They were armed with a variety of taboo and exotic weapons such as Rad Missile launchers[4], Phosphex Grenades, Volkite Serpentas, and Rad Grenade launchers.[1b] 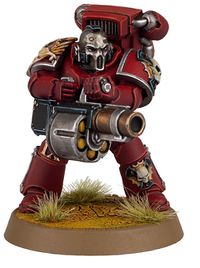