The Angels Encarmine are a Successor Chapter of the Blood Angels Legion and were created during the Second Founding.[Needs Citation]

It is said that no Space Marine Chapter is as active as the Angels Encarmine. Their Chapter Master, Castellan Zargo, cannot rest at peace and so forever seeks opportunities to lead his Battle-Brothers on campaign. As a result, the Angels Encarmine are rarely at full strength, though what they lack in numbers is more than compensated for in determined fervour.[4b] 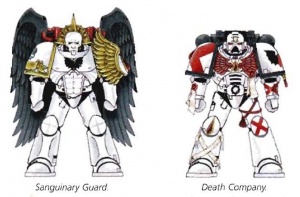 While the Angels Encarmine still follow the organisational traditions of their parent chapter, their Death Company and their Sanguinary Guard are armoured in pure white alabaster instead of the traditional black or gold.[4a] It is worrying to note that their Death Company rarely numbers less than 30 warriors, implying increasing instability in their gene-seed.[4b] Recently, they became the first Blood Angels Successor to put Primaris Space Marines into their Death Company.[9a]

The Chapter's emblem is a red blood drop with black bat wings.[2][4a] 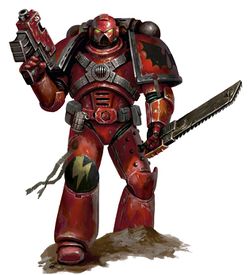 In How to Paint Space Marines, however, the chapter is depicted in the scheme used by the Angels Vermillion: carmine armour with a yellow chest eagle.[3]