The Angels Penitent are a Space Marine Chapter, formerly known as the Angels Resplendent.[1]

Though of an unclear Founding, the Angels Resplendent were founded in M34, putting them around the 8th or 9th Founding. Like many of the less bloodthirsty successors of the Blood Angels, the Angels Resplendent practiced a wide variety of artistic endeavors alongside their martial practice and training. It was common, almost expected, for brothers to be artists when not on campaign, with emphasis placed on painting, sculpting and calligraphy. As each marine was expected to partake in some form of artistic expression, the action itself became semi-meditative and the marines often found themselves mentally grounded and secured by creating art. As a result, for several thousand years they fielded little-to-no Death Company and it was believed the ritual act of creation helped the body and mind of the brothers. [2]

At some point during M41, Chapter Master Varzival took the 1st Company, the majority of the Librarians and many of the senior Chapter officers on a great crusade across the Imperium. During this time the Chapter was left in the hands of the Chaplains and that is when the chapter changed forever. A stranger washed up on the shores of a river near the Fortress Monastery, a tall and whip-cord thin man with a deep stomach scar, and glowing eyes. The stranger was brought before the Chaplains and over the course of weeks and months he explained that the Chapter was hiding from the legacy of Sanguinius. The Chaplains would eventually declare the man a prophet of the Emperor and that the Angels Resplendent were no more.[Needs Citation]

This led to a bloody if brief civil war, where several remaining Captains and all the remaining Librarians were murdered by their brothers in a massacre within the Librarius. The gathered Librarians were set upon by a horde of their brothers whipped into a frenzy by the rhetoric of the Chaplains, faced with this they did not fight back, instead stopping the horde of murderous Angels Resplendent with the battlecry of their Chapter, "We shall rise on burning wings!" For a moment it appeared as if it would work, until Chaplain Malvoisin stepped forward and shouted the new cry of the Angels Penitent, "The Emperor Condemns!" The Librarians were all killed. The Chapter Librarius was set on fire, and all great works of art in the Monastery and on the planet were broken. The Chaplains declared themselves to be the ruling council of the Chapter, known forever as the Council of Thorns.[Needs Citation]

The Angels Resplendent became the Angels Penitent, with brothers practicing extreme forms of self mutilation and denial. All forms of artistic expression were banned on pain of death, and brothers were encouraged to betray one another to the Council for breaches of new Chapter dogma. Subsequently the number of Death Company marines skyrocketed, to the point that several hundred marines are under the effects of the Black Rage and Red Thirst. Its even become common for Scouts to suffer these genetic curses and the Chapter stands on the brink of extinction. [2]

It is hoped by some who hold to the old ways in secret within the Chapter that Varzival will return and reclaim the Chapter, but it has been many hundreds of years. The unnamed Prophet still stands as ruler of the Council of Thorns along with Chaplain Malvoisin and has declared Varzival and the 1st Company dead, or worse, heretics. It is suspected by some within the Chapter that the unnamed Prophet is of Chaos origin, and that he had bewitched the Chaplains. [2] 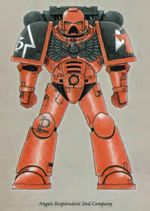 As the Angels Resplendent, the Chapter wore golden power armor trimmed in silver and red. The Chapter badge was said to be similar to that of the Blood Angels themselves. [2]

As the Angels Penitent, the Chapter wear the black of the Death Company with white lines, mirroring vines with thorns, snaking across their armor. Their symbol has become a skull with a crown of thorns. [2]