The Angels Sanguine are a Successor Chapter of the Blood Angels.

The Angels Sanguine were created during the Second Founding and were composed of those Blood Angels that were considered the most glorious and faithful to the image of their Primarch Sanguinius. Before the Angels Sanguine were sent to forge their own history, the Sanguinary Priests of the new Successor Chapters were gathered and presented with the Red Grail of the Blood Angels. Within the Red Grail was what remained of the blood of their Primarch and the newly anointed Sanguinary Priests were required to drink from it; thus the blood and vitality of Sanguinius would be preserved in the bodies of his children in these successor Chapters.[12]

The Angels Sanguine never remove their masks in the presence of anyone outside their Chapter. Even amongst their battle-brothers, their faces are usually hooded.[6] What drives the Chapter's Battle-Brothers to shield their faces from the gaze of others, never removing their helms save for in the privacy of their fortress monastery? And what is the secret of the catacombs that lie beneath the Chapter's home?[3]

It is said that beneath the gleaming masks of the Angels Sanguine is a will of iron; but the truth is somewhat darker. Their terrible secret is known only to a few souls outside the Chapter, but despite this they have a long and glorious history.[2]

A flaw in the Angels Sanguine's Gene-seed requires them to have Aspirants, with a genetic make-up compatible with the people of the Blood Angels' Homeworld of Baal.[12] The Gene-seed deviancy of the Angels Sanguine give its battle-brothers unusually ruddy skin and coarse angelic features.[14]

Members who enter the Black Rage are strapped to the Tablet of Lestrallio, in the Angels Sanguine's Fortress Monastery. Those who regain their senses are presented with the Shroud of Lemartes, as a symbol of their mastery of the Black Rage.[5] 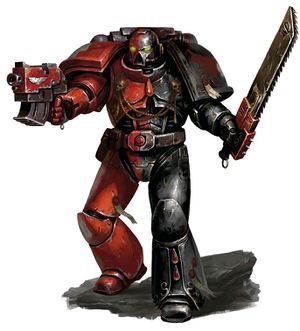