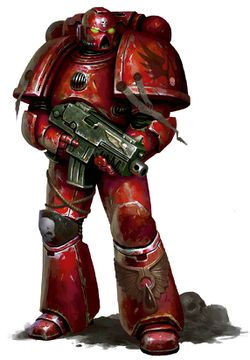 The Angels Vermillion shun all contact with their brother and parent Chapters, and bear their curse in solitude. While Imperial Records of the Chapter's exploits since the Second Founding have been nothing short of exemplary, one wonders about the cause of their self-imposed exile from their brethren, and whether it is simply a shame that must be endured alone, or something darker.[4b]

The 9th Chapter of the Blood Angels Legion was known as the Angels Vermillion. Elements of the Chapter participated in the Scouring of the Nostramo Sector, led by Praetor Kaelon until his death at Sothis in 017.M31 and thereafter by Praetor Sargan Varsaris. They discovered the crashed Shroud of Eventide, vessel of the Captain Ophion of the Night Lords on Kalleth, salvaging it and renaming it the Crimson Intent in 020.M31 in preparation for the coming edict of the Second Founding.[10]

The Angels Vermillion have earned numerous honours in the service of the Imperium, but are rarely seen fighting in the same war zone as the Blood Angels, or any of their parent Chapter's other successors.[6a] 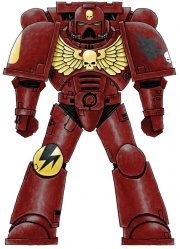 In How to Paint Space Marines, however, the chapter is depicted in the scheme used by the Angels Encarmine: vermillion coloured armour with a yellow chest eagle, black shoulder pad trims and backpack[7].