The Angels of Absolution are a Second Founding Chapter of the Dark Angels.[5a]

The Angels of Absolution stand out from the other Dark Angels successors as their armour is bone white compared to the dark colours of the other chapters.[3][4]

Their structure and belief are still very similar to those of their progenitor chapter, to the point that the two chapters have often joined forces and pooled resources in the hunt of The Fallen[5b]. The only noticeable difference in their doctrines, is that the Angels of Absolution consider their own sins expunged by the actions of their loyalist forefathers during the Fall of Caliban. However they still considered themselves responsible for meting out punishment upon the Fallen and so the Angels of Absolution possess all the drive of the other Unforgiven Chapters, while not being weighed down by their guilt[12]. This belief isn't shared amongst the other Unforgiven Chapters, but all strife seems to have been contained and they continue to cooperate with them.[6] 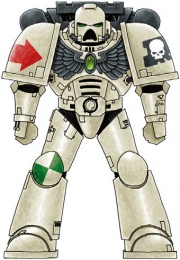