The Angels of Redemption is a Successor Chapter of the Dark Angels, created during the Second Founding.[2]

They are almost as famous as their progenitors, but are known to quickly abandon war efforts, at grievous cost to their allies, in favour of hunting the Fallen. As such, most Imperial forces refuse their help, which causes some conflict with Space Marines of other Chapters[4]. The Angels of Redemption's numerous abandonments of their assigned tasks, eventually led to calls for the Chapter to be censured by the Inquisition, but this been forestalled due to the opening of the Great Rift. The giant Warp Storm has prevented reports of the Angels of Redemption's further misdeeds from reaching Terra, which has allowed the most dedicated of the Unforgiven Chapters to continue their secret quest to hunt the Fallen.[9a] 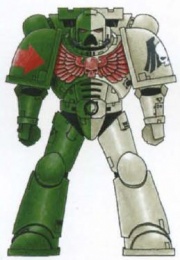