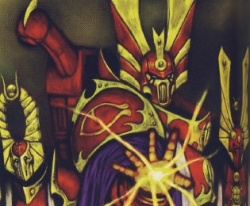 Ankhu Anen was an Astartes of the Thousand Sons Space Marine Legion during at least the latter stages of the Great Crusade.[1a]

A member of the 4th Fellowship, while his rank is unknown, he was entitled as Guardian of the Great Library of Prospero[1a], and as such appeared to hold a position of some seniority and responsibility not only within his legion, but in Prosperine society itself.[Needs Citation]

Ankhu Anen met his fate during the Burning of Prospero, attempting to save the stored texts and records of the Thousand Sons from fiery destruction.[Needs Citation]

Little is known of Anku Anen before the last days of the Great Crusade; he first appears in current records as a member of the Thousand Sons' forces present on Aghoru during the compliance action carried out there by the 28th Expedition. During this process he appeared to act in an oversight position in relation to the selected coterie of remembrancers attached to the Expedition Fleet, and was considered a personal friend by the remembrancer Camille Shivani. Anen was one of the few Thousand Sons to welcome the presence of documentarists amongst them, and took to traveling across Aghoru with Mistress Shivani and supported her archeology efforts in particular out of all the various remembrancers. One remembrancer he had little interest in was Lemuel Gaumon, deciding against reading his work and in fact only meeting him for the first time when ordered to deliver the man to Ahzek Ahriman for instruction in the psychic arts.[1b]

Anen traveled with his legion to war in the Ark Reach Cluster. In the aftermath of the campaign, he led the Thousand Sons teams assigned to catalogue and record all the information possessed by the conquered inhabitants, again working in close concert with Camille Shivani, whose psychometric powers were useful in this regard.[1c][1d] He subsequently returned home to Prospero after the judgement of the Council of Nikaea.[1] Despite the Emperor's order for Librarius departments to be closed and related studies to be ceased, Anen continued to operate as the curator of Prospero's scholarly repositories and soon became involved in the training of Lemuel Gaumon more directly (although still not taking to the man), as well as continuing his working relationship with Shivani, employing her to determine the ancestry of various unreadable texts owned by the Thousand Sons that dated back to the Age of Strife.[1e][1f]

Despite apparently having a sincere appreciation for Shivani's skill and her companionship, Ahkhu Anen did not treat her friends Gaumon and Kallista Eris with much respect; Gaumon he derided from the start and eventually expressed contempt for the man and his powers - despite Gaumon being a pupil of Chief Librarian Ahriman - and unlike Ahriman, he had absolutely no difficulties whatsoever with 'supercharging' the precognitive abilities of Kallista Eris in order to learn of the fate of the Thousand Sons, even though the process was liable to kill her...as in fact it did. Anen appeared to see most mortals as either beneath his notice, or as useful tools at best.[1f]

Anen met his own end during the Burning of Prospero; having been ordered by Ahriman to ensure that as many of the texts of the Thousand Sons escape destruction as possible, he found himself supervising the evacuation of the Corvidae Pyramid at the height of the fighting. Suddenly receiving a precognitive vision - and unraveling a mystery that had plagued him since childhood in the process - he realised he was in immediate danger and attempted to flee...only he was but moments too late, as a Thunderhawk of the Adeptus Custodes crashed into the pyramid, the debris and destruction fatally injuring him and trapping him in place. As Anen lay dying, he perceived that he was being watched by a being able to save him if it so wished...and that it did not. Ankhu Anen lived long enough to be discovered by a combined Imperial disruption team - members of the Custodes, Sisters of Silence and Space Wolves brigaded together - and found himself suffering the last indignity of being forced to watch them burn his books, while under the interrogation of Ohthere Wyrdmake, Rune Priest of the Space Wolves. Wyrdmake pried the location of his personal enemy Ahzek Ahriman from Anen, believing the dying Guardian to be broken. However, the vagaries of fate had opened up to Anen one last time as he stared death in the face, and he willingly told Wyrdmake where Ahriman could be found, in the private knowledge that in at least one probable future, Ahriman would be victorious.[1g][1h]

Anku Anen was described as having long, braided hair that was an auburn colour turning to grey, and with a deeply wizened face. His helm was simply referred to as golden, and his armour in such a condition that the Corvidae symbol painted on the shoulder-guard was hard to make out. At one point he was noted to pilot a personal Land Speeder of the design peculiar to the forces of Prospero; disc-shaped and piloted from a standing position.[1b]