Unlike most Necrons, Anrakyr awoke with his mind fully intact and with renewed purpose.[4] After awakening from the Great Sleep, his mind was fully intact and determined to reunite the Necron Dynasties. He abandoned his world of Pyrrhia and has led an army into the stars with the purpose of annihilating all traces of foreign invaders who occupy any Tomb Worlds he may come across. From each Tomb World he awakens or liberates from invaders, Anrakyr requests a tithe of warriors and weaponry be given over to his cause. His policies have polarized him in Necron society: some view him as an avatar of nobility, a crusader against the lesser races who has abandoned all rank; while others view him as a masterless brigand.[1]

Anrakyr is accompanied by an elite legion of Immortals known as the Pyrrhian Eternals. These ageless veterans are utterly loyal to their master and murderously efficient. He is also able to take control of enemy weapons systems for brief periods of time, deceiving their targeting systems and having friendly fire wreak chaos in enemy ranks.[1]

In battle Anrakyr wields a Warscythe and a devastating Tachyon Arrow.[5] 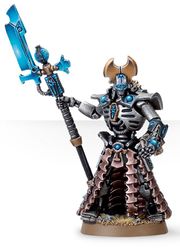