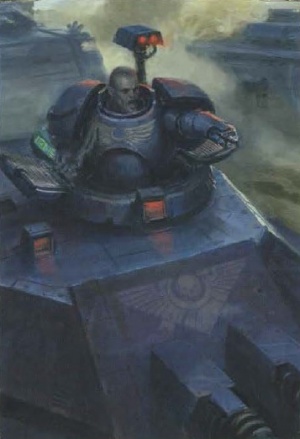 Brother-Sergeant Antaro Chronus, also known as The Spear of Macragge, is the most gifted of all the Ultramarines' tank commanders. While most such warriors dedicate to be the master of a particular vehicle, Chronus' talents extend to almost any tank in the armoury of the Adeptus Astartes.[1a] He has a unique status within the Chapter that sees him answer only to the Primarch Roboute Guilliman and Chapter Master Marneus Calgar[7].

Being assigned to the Chapter's armoury is a sacred duty, entrusting the Brother with some of the Space Marines' rarest and most powerful weapons. This duty requires the Marine to treat his tank as an extension of himself, but Chronus knows his tanks so well that he not only knows their capabilities, but knows exactly what systems can be bypassed or jury-rigged, to keep the tank functional in the heat of battle.[1a]

It was this skill that allowed Chronus to keep the Predator Rage of Antonius battleworthy during the closing hours of the Damnos Incident, despite the tank having taken several broadside hits from Necron Gauss Cannons. Commanding the Rage, Chronus not only managed to complete his mission of destroying the Necrons' Phase Shift Generator, but forced the retreat of the entire Necron War Cell, before the Rage finally shut down. The Techmarines who later examined the damage to Rage considered it nothing short of miraculous that the machine had survived, much less accomplished its mission.[1a]

Chronus's achievements led to his anointment as The Spear of Macragge, a title dating back to before the Horus Heresy, awarded to the Ultramarines' preeminent tank commander. As Spear, Chronus leads the Chapter's armoured assaults, and has the privilege of choosing the vehicle he will ride into combat. His position is unique in that he commands a unit of some fifty Ultramarines, but is not subject to the orders of a Captain, and answers only to the Chapter Master himself.[1a] It is known that since the Great Crusade no one except Chronus bear the title Spear of Maccrage.[4]

During the Damnos Reconquest Antaro Chronus piloted Gladius II — the Land Raider with Godhammer pattern lascannons in its sponsons, and managed to destroy six xenos engines.[5]

During the Invasion of Ultramar in 854999.M41, Chronus was deployed to Quintarn, alongside the 5th and 6th Companies of the Ultramarines. Faced with the apparently inexhaustible machine armies of the Dark Mechanicus warlord Votheer Tark, Chronus led his armoured division and the tanks of the Ultramar Defence Auxilia in a vital delaying action, holding off the Chaos war machines until the city of Idrisia could be fortified against their next assault.[3]

Since the Great Rift Chronus continues to lead armored assaults, but now often is at the helm of a Land Raider[7].