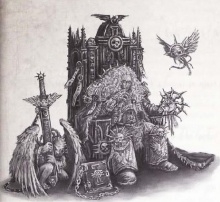 Anton Zerbe is a Lord Inquisitor of the Ordo Hereticus.[1]

Commanding the Tyrantine Cabal of Inquisitors in the Calixis Sector, he is known to rarely leave the Bastion Serpentis in order to frequently chair Inquisition meetings. Zerbe once roamed the Imperium to seek out corruption and incompetence among the Adeptus Terra but now is dedicated to his currently role. Even to a fault, his principle motivation is preventing strife within the Inquisition's ranks in the Calixis Sector. As a result he is sternly against the factionalism that plagues the Inquisition, particularly against the Recongregators, Xanthites, and Amalathians. However he is distant, and is not approachable to even his colleagues. Ultimately he tries to prevent any of these factions from becoming dominant in order to avoid all-out chaos.[1]

A powerful Psyker, he is never seen without his golden mask and gilded armour.[1]