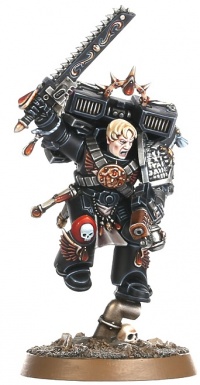 Antor Delassio is a member of the Deathwatch.[2]

Hailing from the Blood Angels Chapter, Delassio is a Assault Marine Sergeant. However, he harbors a dark secret - that of the Black Rage that afflicts him. As such, he is prone to berserker rages in battle.[1]

Delassio was given the honour of signing up for an indefinite tour of service with the Deathwatch by Chapter Master Dante personally, becoming one of the few Blood Angels at the time to be welcomed by the Chapter.[2]

At one point, Delassio and the rest of his kill team were travelling onboard the Deathwatch Strike Cruiser Incontrovertible Truth en route to the planet Mariach to fight against Eldar raiders. However, the Incontrovertible Truth was ambushed by ships of the Black Legion when it dropped out of the Warp to deliver another group of Space Marines to Watch Fortress Erioch. As the Strike Cruiser was crippled and boarded by the Chaos Space Marines, the forty-four Deathwatch Marines onboard fought back, but were forced to spread out through the ship to deal with multiple points of incursion. Delassio, along with the other Marines he was with at that point (Casella, Grennon, Lokar and Sanctimus), was ordered to reinforce the port aft cargo hold, and found himself acting as a mediator between his shorter-tempered allies.[2]

Delassio and his battle brothers found their progress through the ship stymied by battle damage while the Black Legion killed the Marines who had assembled to repel them, including Watch Captain Gharvil. After Gharvil's death, the Black Legionnaires established a bridgehead, jamming communications and methodically proceeding through the Incontrovertible Truth to slaughter the remaining defenders. Delassio realised that the Black Legion wanted to capture the ship, rather than destroy it, and so he and his fellow Marines set a series of ambushes of their own in the passageways of the ship. In these combats with Black Legion units, Delassio felt The Flaw for the first time.[2]

The Marines were able to kill many of the Black Legion in their ambushes, but over time started suffering losses. Grennon was the first to fall, followed by Lokar and Sanctimus with Casella badly wounded. Casella sacrificed himself to allow Delassio to escape and head for the bridge. As he made his way there, he realised that the Chaos Space Marines wanted the Deathwatch's ship intact so that they could bypass the defences of Watch Fortress Erioch and attack it. In a rage, Delassio stormed the bridge, killing all of the Traitors guarding it, and was able to throw the ship off course before succumbing to a Sus-anic coma from his wounds, the sole survivor of the attack.[2]

In the aftermath, Delassio was taken to Erioch's Apothecarium and revived. He was questioned by several Watch Captains, an Inquisitor and even the Master of the Vigil himself.[2]

In M41 Antor Delassio took part in the purging of a Genestealer Cult on Ghosar Quintus.[1]

Delassio wields a Hand Flamer called Ignatus, presented to him in gratitude by the Ordo Xenos, along with a Chainsword. He also makes use of a Jump pack.[2]