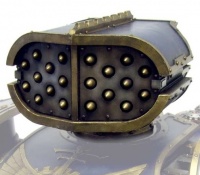 An Apocalypse Missile Launcher mounted on a Reaver Titan[7]

The Apocalypse Missile Launcher is a huge weapon usually found mounted on Imperial Titans and other Super-Heavy vehicles. The weapon consists of multiple missile-tubes capable of launching an immense barrage of explosive fire. The destructive potential of just one Apocalypse launcher is equivalent to an entire Imperial Guard artillery company.[1] The missiles fired by an Apocalypse launcher travel at supersonic speeds,[2] and just one salvo is enough to flatten an entire square kilometer of area.[3]