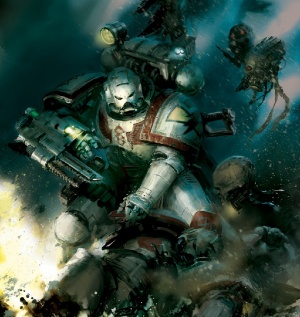 Apothecaries are Space Marines with special medical training. Their role in battle is to recover the Chapter's gene-seed from killed Marines and to tend to the wounded. Outside of combat, Apothecaries are responsible for monitoring recruits and neophytes for mutation or flaws in their gene-seed organs and implants.[1] 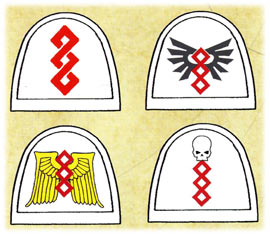 The Apothecary's role is to serve as a field medic and bio-researcher. Along with being highly trained in medicine, they are among the elite warriors in the chapter.[Needs Citation]

Apothecaries are greatly honoured within the Chapter, as they are responsible for maintaining the purity of its gene-seed. If its gene-seed were to become mutated, it could well bring the Chapter's extinction or its fall to Chaos. The Apothecaries are charged with maintaining the health and genetic purity of the Space Marines. Their skills and equipment, when combined with the added organs and resilience of a Space Marine, allow an Apothecary to perform battle surgery with a good chance of success.[Needs Citation]

Not all wounded Marines can be saved; some are beyond even the Apothecary's skills. In this case, it is the Apothecary's responsibility to administer "the Emperor's Peace" (euthanasia) to those warriors who deserve it. The Apothecary's medi-pack (known as a Narthecium) includes a special humane killer for this task, called a Carnifex — a solid spring-loaded piston of metal. This is applied to the sufferer's temple, its powerful spring hurling the piston through the Marine's brain and killing him instantly.[3]

It is also the Apothecary's duty to harvest from the bodies' of fallen Marines the two implanted Progenoid glands, allowing for the gene-seed material to be cultivated and re-implanted in a Neophyte. Marines rarely go into battle without an Apothecary being available, as every Marine is a valuable resource and to lose any of their gene-seed would be a blow to the Chapter.[Needs Citation]

Each Company in a Chapter has an attached Apothecary that accompanies them into battle. Additional Apothecaries staff the Apothecarion, although they rarely take to the field, instead acting as bio-researchers and occupying themselves in taking part in the training of Neophytes and potential new Apothecaries.[2]

The insignia of the Apothecaries is the prime helix, rendered in bright red.[16] The symbol represents the sacred code of the Chapter's gene-seed.[Needs Citation] The helix symbol is often adorned with additional iconography such as wings and skulls.[16]

The Apothecaries of most Chapters wear white power armor, with the left shoulder plate retaining the Chapter colors along with the Chapter symbol. The right shoulder armor displays the prime helix. Some less traditional Chapters use different schemes.[Needs Citation]

The new generation of Primaris Space Marines also utilize Apothecaries. Unlike their Firstborn cousins, they are known to wield Reductor Pistols and Absolvor Bolt Pistols.[17]

Primaris Apothecaries may also become a specialist known as a Helix Adept which are assigned to Vanguard Space Marine squads.[18]

Are Apothecaries in training, who have been selected due to the medical talents they have shown while serving in their squadrons[24b]. The Initiates are apprenticed to an Apothecary for their training and will also assist in their mentor's duties[24a]. However until they are declared Apothecaries themselves, the Initiates must continue to serve in their squads, when they are not undergoing training.[24b] 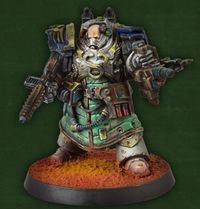 Primus Medicae's were high-ranking Apothecaries of the Legiones Astartes during the Great Crusade and Horus Heresy. These officers held the onerous duty of overseeing the battle-readiness of their Battle-Brothers and above all else protecting the Legion's Gene-Seed.[21]