The Aquila, symbol of the Imperium of Mankind[3]

The Aquila[1a] (plural: Aquilae[10]) (also known as Imperial Aquila [5], great Aquila[15] and Imperial Eagle[2]) normally[29][Note 1] refers to a two-headed eagle[1a][3] that symbolizes the Pax Imperialis, the oath that binds together all Imperial servants under the banner of the Emperor of Mankind[2]. It is a universal symbol within the Imperium and more than anything else represents the dominion of the Emperor.[29] It is also said that the Eagle and its variations symbolize both the Imperium as such and also loyalty to the Emperor as its master.[8] It also is the heraldic device of the Imperial state and at the same time holy symbol of the Imperial Cult.[10] The double-headed eagle also represents the union of the Mechanicum of Mars and the Emperor[12a] or between Mars and Terra[14].

When the newly-found Fulgrim was brought to Terra by the Emperor to join his, Fulgrim's, Legion the Primarch addressed his warriors in a speech. Tasking them with bringing the wisdom of the Emperor to all the stars and underlining that they were the children of the Emperor. The Emperor was so impressed by these words that he bestowed a unique honour on Fulgrim's Legion: They would be permitted to display the Imperial Eagle on their armour chestplates - the only Legion permitted to do so.[27] Possibly[Note 2] the Aquila was also already being used more generally on Power Armour during this and later times.[26]

There has been at least a five Aquila coin in use as Imperial currency in the time prior to the Horus Heresy.[11a]

Towards the end of the Horus Heresy when the final battle for Mars was underway the armour development teams were evacuated from Mars to Terra where they continued their work. The result of their work was the Mark 7 Armorum Impetor or Eagle Armour which takes its common name from the Eagle device it bears. The Eagle Armour started to reach the loyalist Space Marine defenders on Terra and on the Moon when Horus and his forces overcame the last resistance on Mars.[26] For possible uses of the Aquila on earlier marks see [Note 2].

The Aquila most commonly[29] has two heads looking into different directions[29], one said blinded to look at the past, one sighted to see to the future[1a] or one head gazing into the Materium while the other gazes into the Immaterium[29]. Other sources associate the blind head with the Adeptus Astronomica[6][10] and the seeing head with the Adeptus Astra Telepathica[10][Conflicting sources]. 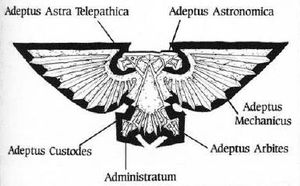 The device of the Aquila is generally used throughout the galaxy wherever the Imperium wishes to proclaim its authority.[10] Typical examples include architecture[12c], armour, vehicles (like space ships[1c][31a][31b]), weapons, containers[1d] etc.[10] and - at least prior to the Horus Heresy - also currency, i.e. on coins[11a]:

The Aquila as an adornment

The Aquila on vehicles and weapons

The Sign of the Aquila (often shortened to simply Aquila) is a sign of devotion to the Imperium[4] also used for example as a sign of defiance against Warp entities[11c]. It was used a sign of devotion from early on[1e]. It is also known to have been used as a formal greeting between at least Space Marines[11b] and as a sign of respect towards fallen brothers[11d].

Descriptions of how to actually do this sign are however a bit unclear: In one instance it is said that hands are placed or pressed to one's chest, palms open, blades of fingers extended and thumbs raised[1f] while others say and show the thumbs are interlocked or crossed[4][9][15] while yet another source says the "fingers" are "laced" into the shape on an Aquila[17]. 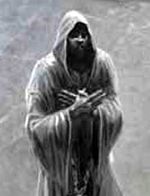 Aquila simply is the Latin and Romance languages word for eagle.

Double-headed eagles are or have been used in many different contexts throughout history: "In heraldry and vexillology, the double-headed eagle (or double-eagle) is a charge associated with the concept of Empire. Most modern uses of the symbol are directly or indirectly associated with its use by the Byzantine Empire, whose use of it represented the Empire's dominion over the Near East and the West."

Modern day users of the emblem are as diverse as Albania, Serbia, Montenegro and Russia, the Hellenic Army, different Orthodox Christian Churches and also cities such as Toledo (Spain), Velletri (Italy), Rijeka (Croatia) or Konya (Turkey) to name but a few.

Since the word Aquila simply means "eagle" special attention should be paid to the exact context and wording of sources. Sometimes Aquila, Eagle or Imperial Eagle might refer to the double-headed symbol, but sometimes it might also denote a normal, one-headed eagle.

Due to the lack of supplies during the Horus Heresy the different marks of Power Armour including older ones were used throughout the conflict and even thereafter.[26] In addition older marks came to be associated with the history or past deeds and are therefore still used and much sought after up to current times.[26] Since these images are not precisely dated it is impossible to say if the use of the Aquila was a constant or temporary feature or when it started.

The image of the Aquila in Warhammer 40,000: Rogue Trader[6] relatively clearly shows that the inscription "Adeptus Astra Telepathica" is connected to the left wing and not to the sighted head of the eagle. But The Inquisition (Background Book)[10] unequivocally states that when "depicted in correct detail" the sighted head represents the "Adeptus Astra Telepathica". Therefore it could be assumed that the image in Rogue Trader is incorrect. But on the other hand The Inquisition does not mention the left wing at all.[10]