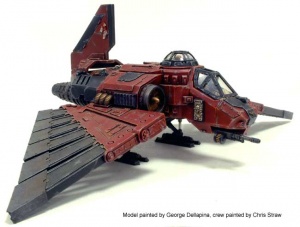 The Aquila Lander is a light shuttle typically used by the Imperial Navy.

The Aquila Lander is used to carry officers or other important persons from orbit to ground level and is named because of its wing arrangement. The wings end in a feather-like design and taper back as if in imitation of the sign of the Aquila. It is not designed as a combat vehicle, being only lightly armed with a Heavy Bolter (other variants replace the Heavy Bolter with a Multi-laser or Autocannon) for self defence, but it is well enough armoured to survive atmospheric insertion that it can protect its passengers from several hits before going down.[1]

The Aquila has one crewman, a pilot, in an armoured cockpit at the front of the vehicle. Twin jet engines are beside the cockpit and built within the fuselage, which allows the vehicle to hover over its landing point. Above them is an observation dome. Sometimes Aquilas are decorated with purity seals.[1] 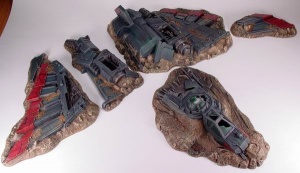 A crashed Aquila Lander from the Battle for Macragge box set

Forgeworld has released a model for the Aquila Lander[2] and a crashed version featured as several pieces of terrain in the Battle for Macragge box set.[3] The crashed version was later released separately as a Bitz Pack.[4]