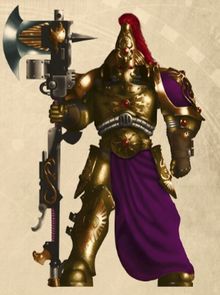 The Aquilan Shield is a Shield Company of the Adeptus Custodes.[2]

Also named The Gilded Guardians, The Aquilan Shield is tasked to escort and protect individuals they believe to be essential to the Emperor's safety. Most often this is done according to predictions of the doomscryers of the Imperial Palace who sift the tides of the empyrean for warnings of disaster, they also take note of those who – through deed, thought or example – are likely to avert great catastrophes before they threaten the Golden Throne. Custodes of Aquilan Shield are a small brotherhood typically operating in warrior bands, journey across the stars to stand watch over their charges wherever they may be. No warning is given or permission asked - the warriors appear as if out of nowhere and will announce their quarry is now under their protection regardless of consent. However such an honor is beyond compare, and their protection is never refused. The Aquilan Shield have acted as bodyguards to High Lords, Canonesses, Lord Inquisitors, Generals, and even Space Marine Captains. They have even protected two Crusade Warmasters in the past. The Aquilan Shield fight to ensure such a future comes to pass, defending their charges from harm until the exact moment the usefulness of the person under their protection is deemed spent. After that point they depart without a word, leaving those they guarded to look to their own future. So the tragedy often follows, but this is of no concern to the Custodes of the Aquilan Shield – providing it does not endanger the safety of the Golden Throne.[3a]