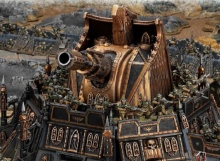 Row of Macrocannons mounted on an Imperial Navy starship

The macro cannon are a type of Macroweapon and the largest form of auto-weaponry, much heavier even than the autocannon. Standard ground-based Macrocannons fire massive and explosive shells at a maximum range of around 40 km. Although it is possible to mount them on heavy vehicles, they are more suited for use in emplacements and static defence due to their considerable size and potency.[1] Void-based Macro-weapons have an effective range comparible to Nova Cannon, which fire projectiles at close to the speed of light [7].

They are a Standard Template Construct, and often form the primary weapon of starships [2], as part of weapons batteries [7].