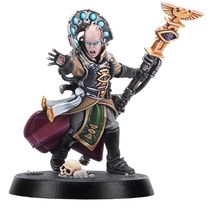 Aradia now serves as a psychic attache to the Rogue Trader Neyam Shai Murad. The Psyker's precognitive visions have guided Murade in her quests through the uncharted reaches of the galaxy. She receives glimpses of the future as well, which help dictate which allies Aradia should align herself with and which foes she should eradicate. Aradia also seeks to use her powers to steer the fate of the Imperium, as it battles against the horrors that abound in the stars.[1] After receiving a vision of untold destruction caused by a Blackstone Fortress, Aradia now seeks out the ancient vessel to claim it for the Imperium.[3]