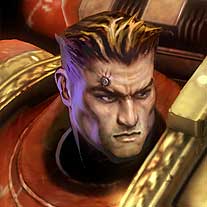 Aramus[1a], commonly refered to simply as the Force Commander, was the leader of various Blood Ravens strike forces during the Aurelian Crusades.[2][3]

Aramus first drew attention to himself during the Hadrian Campaign, where he led a mission that successfully destroyed an enemy artillery position without taking any casualties. In the wake of this success he was promoted to the position of Force Commander by Chapter Master Azariah Kyras himself. The youngest Blood Raven to ever gain this position, some of the senior members of the Chapter believed it to be a premature promotion. [2]

Aramus and his surviving men were awarded the title "Heroes of Typhon" after the final battle against the Tyranids on that world.[2]

Aramus would eventually rise to become Captain of the 4th Company, promoted by Gabriel Angelos to take the place of Davian Thule, who had been entombed within a Dreadnought.[3]

The Commander wields a Chainsword and Bolt Pistol as default, but later gains access to virtually the entire Blood Ravens Armoury.[2][3] There eventually appears a Thunder Hammer named Hammer of the Nameless amidst the various weapons stored in said armoury, which is recorded as belonging to the youngest force commander in the chapter's history and rumoured to have been used to banish the Greater Daemon Ulkair.[4]