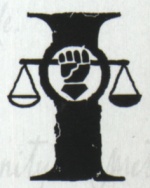 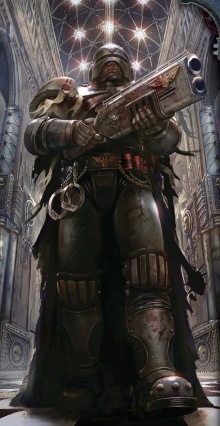 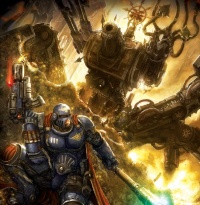 During the War of the Beast, the significant Arbites garrison on Terra saw heavy action against the Ork Attack Moon over the Throneworld. The Arbites took catastrophic losses in the failed Proletarian Crusade, and its surviving Terran contingent struggled to maintain order on Terra as upheavals caused by the Greenskin presence broke out.[15] 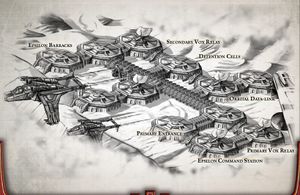 Standard personal weaponry is the Arbites combat shotgun, boltgun, grenade launcher, suppression shield and the power maul. Several types of grenades are used, both lethal and incapacitating. Some Patrol groups and Enforcers may use Cyber-Mastiffs to hunt down and catch criminal fugitives who attempt to escape.[4][5]

The Arbites also make use of a wide range of vehicles, such as Rhinos[6a], Repressors[6b], Chimeras[6c], Leman Russ Battle Tanks[22], as well as aircraft like the Valkyrie and the Brawler T8. They also make use of Tarantula automated turrets for crowd control, riot suppression, and defending their precincts.[9] 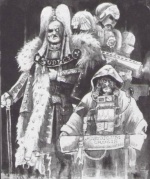