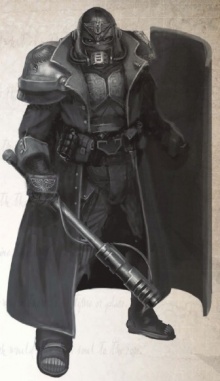 The Arbitrators are the militant arm of the Adeptus Arbites. Apprehending and punishing those who break the Emperor's laws, Arbitrators are fanatically devoted and well-armed. These brutal enforcers of the Lex Imperialis are typically housed in their planets Precinct-Fortress.[3a]

There are numerous ranks and roles within the Arbitrators:

In Calixis Sector the Lord Marshal Goreman has authorised his subordinates to pass titles of their own on their subordinates. Arbitrator who excels in interrogating might be called "Tongue-Cutter" or "Mindscour", for example. [3a]

Arbitrators are well-armed to fight a small scale war. They are commonly equipped with Carapace armour and weaponry such as Shotguns, Grenade Launchers, Suppression Shields[2], and Power Mauls. They also make use of Rhino, Chimera, and Repressor armored vehicles.[1]

Detective is used in Codex Imperialis to describe computer-agents that tracks cyber-criminals.[1] In much later works from Fantasy Flight Games detectives are branched into subgroups presented earlier[3b] but there is no specific sub-group for the 2nd Edition era detective.