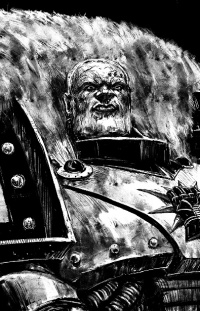 Archamus was a Captain of the Imperial Fists during the Great Crusade and Horus Heresy. Acting as commander of Primarch Rogal Dorn's Huscarl Honour Guard, Archamus was less emotional and more in tune with the emotions of his gene-father than First Captain Sigismund.[1] Archamus was a highly suspicious and careful individual, acting disdainfully towards members of the Word Bearers even before they had revealed their treachery.[2]

Archamus was born Kye on Inwit in the early 800's.M30. As the recently discovered Rogal Dorn swore an oath to serve the Emperor, Kye was one of the original Imperial Fists to be inducted into the Legion under him, an honored fraternity known as The First. During his training as an Aspirant, Kys bonded closely with his squadmates Archamus and Yonnad. As part of the brutal training, the trio were forced to fight Combat Servitors together. During one such action Archamus died saving Kye. When Kye was subsequently inducted into the Imperial Fists and said his vows before Rogal Dorn, he took the oath name Archamus in his squadmate's honour.[3] Archamus would eventually rise to become Dorn's trusted praetorian and captain of his Huscarls guard. Throughout the Great Crusade and then the Horus Heresy, all of the members of The First save Archamus eventually died. This led him to become known as the Last of the First.[3a]

During the Solar War, Archamus was charged with investigating Alpha Legion activity across the Sol System. Working with his trusted Sergeant Kestros and the Luna Gene-Cult Psyker Andromeda-17, Archamus was eventually able to deduce that the Alpha Legion intended to assault Pluto. During the subsequent battle, Archamus was impaled by Alpharius himself as Rogal Dorn arrived. As Dorn and Alpharius clashed the wounded chief Huscarl sees Alpharius is set up for a killing shot and tries to intervene in the fight but reels harmlessly off of the Pale spear. Archamus was unaware that Dorn had seen the strike, the Imperial Fists Primarch choosing to step into the blow to tank it in his shoulder to pin Alpharius in place, Dorn then killed the traitorous Primarch with Storm's Teeth. In a rare emotional moment, Dorn stated to his "son" that he had failed him. However as Archamus died, he said he was not Dorn's son but his praetorian.[3b]

In the aftermath of Archamus' death, his second-in-command Kestros became commander of the Huscarls as well as taking up the name as Archamus in memory of his commander.[4]