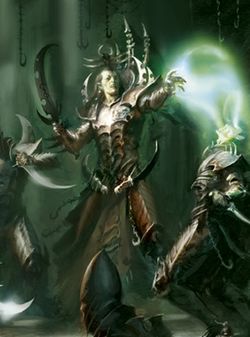 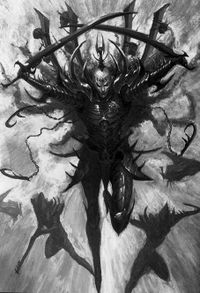 An Archon is the highest ranking member of a Dark Eldar Kabal and the ruling nobles of Commorragh[11]. They are considered the single most powerful, ruthless, and cunning member of their Kabal, due to the fact that if there existed anyone who held greater ability in these aspects, they would no doubt kill their Archon and claim their title.[Needs Citation]

Indeed, the singular power Archons hold over the members of their Kabal make the title incredibly appealing to subordinates, and assassination attempts are not only common, but frequent. The average Archon suffers dozens of assassination attempts before finally succumbing, and some have maintained their position even after well over three hundred attempts on their life.[Needs Citation]

Despite the elaborate network of allegiances within the Dark City, the Overlords of the Kabals run rings around those who seek to beat them at their deadly game. The endless ambition of their underlings keeps their paranoia razor-sharp, and hence it is at the business of treachery that the Archons truly excel. These strategies have been known to play out for millennia. Some of the Lords of Twilight, who govern from the highest spires of Commorragh, even claim to have seized their thrones in the times before the Fall of the Eldar. These elder Archons look down upon their younger kid, and do not suffer fools gladly. Notoriously prideful, a single syllable out of place may rouse an Archon’s deadly wrath, and in matters of Kabal hierarchy, Archons will seek solutions that work to the detriment of all other parties purely out of spite. However revelling in such dark depths has exacted its price. Kept alive for millennia through the torment of others, it now takes a true atrocity to invigorate them. . Thousands of slaves are sacrificed before the oldest Archons each night, and still this might not be enough to grant them a youthful sheen. Hence, elder Archons sometimes cover their black-veined visages with masks. Some are stylized and beautiful, some fashioned from the flayed faces of rivals[11].

Archons have access to the most powerful weapons, equipment, and artefacts available to their Kabal, and as such are frequently seen using amazingly advanced technologies when they deem it necessary to appear on the field of battle (although some arcane items of Haemonculi or Incubi are restricted even from the archons, as powerful as they are).[Needs Citation]

Every Archon carries a splinter pistol, though some may carry more powerful Darklight Weaponry such as a Blast pistol or even a blaster. Some archons, preferring close combat, may boost themselves with combat drugs more commonly used by wyches. They also may carry many kind of blades like djin-, husk- or just common powerblades. Whips such as the agoniser and Electrocorrosive Whip are also popular.[Needs Citation]

Archons, like the vast majority of Dark Eldar, feel that speed and dexterity are more than a replacement for defence, and wear only a light pressurised neuro-responsive body armour, allowing them to traverse vacuum when necessary and shrug off most civilian arms fire. Their suits, however, are usually covered in trophies and ornate fixtures that are better representative of their lofty position within the Kabals. Nowadays archons may also possess lightweight Ghostplate Armour which also incorporates minor forcefield technology.[Needs Citation]

More rare protective gear is also being used by archons. The very rare Shadow Field provides the best protection of all Dark Eldar technology. There is also the strange clone fields used by some archons.[Needs Citation]

Archons are almost always seen with a retinue in the field, and this retinue is usually the same group of Warriors or Incubi that work as bodyguards when in Commorragh, protecting the Archon and his palace from would be assassins or rival Kabals. An Archon's retinue can also include more exotic members such as Medusae, Lhamaean, Sslyth or Ur-Ghul.[1a]