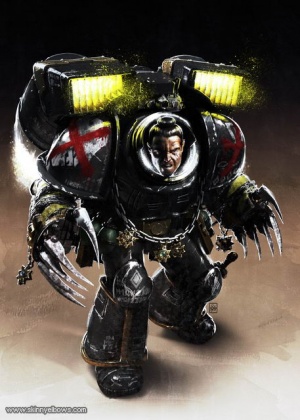 Ardaric Vaanes was a Renegade Space Marine, formerly of the Raven Guard chapter.

Once a Shadow Captain of the Raven Guard's 4th Company, and a senior training instructor at the Ravenspire[4b], for unknown reasons, Vaanes turned his back on his chapter and followed the path of other renegade Space Marines. He was declared Excommunicate Mortis in 934.M41.[6b] At some point in his travels, he joined the Red Corsairs under Huron Blackheart, but later left Huron's warband and swore allegiance to The "Dark Prince."[2]

He appeared as the leader of a ragtag group of other renegades surviving on Medrengard, home planet of the Iron Warriors inside the Eye of Terror. There he encountered Uriel Ventris and Pasanius Lysane, two Ultramarines who had been carried to Medrengard after being exiled from their chapter on a Death Oath. Uriel offered Vaanes and his men a chance for escape, and, more importantly, a chance to regain their honour, if they would help destroy Warsmith Honsou's fortress of Khalan-Ghol.[1x]

Midway through the mission, Vaanes recanted and abandoned Uriel and Pasanius, outraged that their actions had caused the death of most of his men. He only narrowly survived the fortress's destruction, and was found wandering the rubble by Honsou and the remains of his Grand Company. Instead of killing him, Honsou offered the former Raven Guard a place at his side. Feeling he had been fooled and cheated by Ventris, Vaanes accepted.[1a]

Vaanes was assigned to train The Newborn, a mutated clone of Ventris that Honsou had salvaged from the fortress, in unarmed combat.[2][6a] He participated in several of Honsou's subsequent actions, including the Skull Harvest on New Badab[2], the destruction of Tarsis Ultra[3], and the campaign to capture the Ultramarines' star fort Indomitable.[4b]

Vaanes was invaluable to Honsou's Invasion of Ultramar, leading a party of loxatl mercenaries to scale Guilliman's Gate on Calth, to let the attacking Iron Warriors in. During the fight at the gatehouse, he was captured by Shadow Captain Aethon Shaan and his elite squad, who had been sent by the Master of Shadows to apprehend Vaanes and bring him back to the Ravenspire for punishment.[6c]

However, Vaanes said he had allowed himself to be captured, since he'd decided he no longer wanted to fight for Chaos anymore. Nor did he wish to rejoin the Emperor's service; all he wanted from Uriel, he said, was the release of death, and swore to guide the Ultramarines to Honsou's objective if Uriel would grant it to him.[6d]

In the climactic fight, in the hidden tomb of Ultramarines hero Remus Ventanus, Vaanes unexpectedly escaped his bonds and attacked Honsou's adjutant, Cadaras Grendel, and then Honsou himself. Honsou killed the Raven Guard with his necrontyr arm, but bought Uriel and the other Ultramarines enough time to gain the upper hand.[6e][6f]

Afterwards, Captain Shaan felt unsure how to explain Vaanes's actions to the rest of the chapter. Uriel suggested that Shaan tell the Master of Shadows the truth: that Vaanes had given his life fighting against the Ruinous Powers of Chaos. Shaan agreed, and asked Apothecary Selenus to extract Vaanes's geneseed for return to the Ravenspire. Uriel noted that, in death, Vaanes's expression reflected a measure of peace that he had never felt in life.[6g]

After their reinstatement to the Ultramarines, Uriel and Pasanius were questioned closely by Chief Librarian Tigurius, who asked them if they understood the path that had led to their Death Oath and exile from the chapter. As Uriel reflected, Vaanes stood out in his mind as a painful example of an Astartes who was not evil, yet could stray from the Emperor's service, become a renegade and associate with the vilest enemies, all for reasons which seemed good at the time.[5]

After abandoning the Raven Guard, Vaanes had his chapter's tattoos removed from his skin, yet in the midst of the Invasion, he noticed the chapter symbol reappearing on his deltoid, as if he were being recalled to the Emperor's service, against his will.[6a][6d]

When Uriel confronted Vaanes after his capture, the Ultramarine saw that Vaanes had all the makings of a great man, yet flawed in some way that had turned him to evil. When Uriel asked "what happened to you?", Vaanes simply replied, "I'll never tell you."[6d]

Shortly before the Invasion of Ultramar, The Newborn had encountered a psyker on New Badab who predicted that his fate was "woven into the tapestry of a great hero's death, the fall of a star and the rise of an evil long thought dead."[2] As the Ultramarines completed their victory over Honsou's forces, Uriel remembered these words and had no doubt that the great hero referred to was Vaanes.[6h]