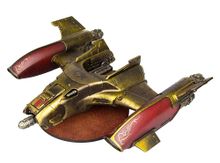 The Ares Gunship is a type of aircraft used by the Legio Custodes used during the Great Crusade-era where it developed a fearsome reputation as a terror weapon. [1]

Using its immensely destructive Arachnus Magna-Blaze Cannon, the Ares was deployed to strike at monuments and edifices which an enemy culture held most dear to their hearts. Additional weaponry included two Arachnus Heavy Blaze Cannons and two Infernus Firebomb Clusters.[1]

Such was the infamy the Ares Gunship earned in the Unification Wars, that when the Emperor's forces were embroiled in a month-long standstill on the Antipodean Peninsula, the mere sight of a single Ares Gunship hovering above the domicile of that regime's Chancellor led to the enemy's unconditional surrender. After Terra was united under the Emperor's rule, the Ares Gunship would then be deployed against the Imperium's enemies in the Great Crusade.[1]