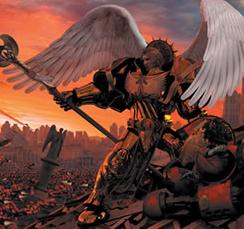 Arkio (also known as Arkio the Blessed and the Reborn Angel), was a veteran Blood Angels Space Marine, and the figurehead of the short-lived "Arkio Insurrection."[Needs Citation]

Arkio was the son of Axan and younger brother of Rafen, and was born on Baal Secundus as part of the Broken Mesa Clan. Arkio was recruited, along with his brother Rafen, to become a Space Marine by Brother-Sergeant Koris.[Needs Citation]

Due to sibling rivalry between himself and Rafen, Arkio began to strike out alone to find his own course, and took a posting on the Bellus expedition, a mission led by Inquisitor Ramius Stele to recover the lost Spear of Telesto, that had once belonged to Sanguinius, from the hands of an ork warlord. During the mission, he was promoted to the position of honour guard for the Sanguinary Priest Sachiel. They successfully recovered the Spear and returned it to the Chapter. However, Arkio was unaware that he had been chosen for manipulation by Inquisitor Stele in a scheme that would ultimately plunge the Blood Angels into civil war and nearly destroy the whole Chapter. Stele somehow managed to plant an "egg" (crafted by the Lord of Change Malfallax from himself) between the bones of his spinal column, and slowly mutated him into the image of Sanguinius.[2g]

The Bellus and Arkio (still untransformed) travelled to the burial world Cybele, which was under assault by a force of Word Bearers Chaos Space Marines led by the Dark Apostle Iskavan the Hated, to relieve the Blood Angels forces guarding the world. When the Blood Angels were at their lowest ebb, Arkio surprised the other Marines with an inspirational speech, and a plan of action to re-take the initiative. Arkio led an infiltration mission to the enemy-held space port and turned its orbital missiles on the Chaos Grand Cruiser Ogre Lord in orbit, destroying it and sending Chaos forces reeling. He later single-handedly saved Sachiel from a daemon, then rallied the men and became the figurehead which turned the tide against the Word Bearers.[Needs Citation]

The Blood Angels' inspired by Arkio and Sachiel (and quietly encouraged by Inquisitor Stele) pursued the apparently fleeing Word Bearers to their base on Shenlong, against Chapter Master Dante's orders to remain on Cybele. En route there, aboard the battleship Bellus, Arkio was presented with the Spear of Telesto as a reward for his bravery. The spear did not react to the daemonic seed planted in Arkio (due to Stele having first calmed it and stabilised the mutation beforehand), and instead flared with a white light that enveloped Arkio, turning him into the likeness of Sanguinius himself for a second before the vision faded.[Needs Citation]

During the fighting at the Ikari Fortress on Shenlong, Arkio and seven honour guards, along with Stele, teleported into the midst of the Word Bearers. The Spear of Telesto then unleashed a blast of energy that vaporised them at Arkio's command, but leaving the Blood Angels untouched. All present there were led to believe that he was Sanguinius reborn (except for his brother Rafen and Stele). Word of Arkio's deed quickly spread amongst the Shenglongi people, and they began to make pilgrimage to see him. Arkio made a request to wear gold armour as Lord Dante does, believing that he had grown beyond the crimson armour of his servitude, and this was granted. Then he demanded of the gathered pilgrims to know where the Word Bearers had hidden themselves, and warned them that measures would be taken if they did not answer. To his brother Rafen's horror, the crowd surged forward into the opening bolter fire of the Blood Angels, eager to be punished and granted the "murder-gift". Arkio later confronted Iskavan during battle and killed him, rescuing Rafen in the process. During the struggle, Arkio's backplate armour was destroyed and white angelic wings emerged from his back.[Needs Citation]

Now truly believing himself to be Sanguinius reborn, Arkio took over governorship of Shenglongi, and began to raise a thousand-strong army (called the "Warriors of the Reborn") from the Shenglongi people to begin his Blood Crusade, which would unite all Blood Angels under his banner and take stewardship of the Chapter for himself. Meanwhile, Dante, having received the secret transmission made by Rafen through the deceased Sergeant Koris's vox links, asked Chief Librarian Mephiston to send Epistolary Vode and Captain Gallio to judge Arkio. Upon meeting Arkio, Vode sensed the evil with him, and was further enraged that he would usurp Sanguinius' name, and attacked him with his Force Axe. Vode and Gallio were both killed, and Arkio ordered the Bellus to fire upon Gallio's Strike Cruiser Amareo, destroying it. Sachiel then sent a message to Dante, requesting his personal audience on the Shrine World Sabien in nine solar days on behalf of Arkio. This time, Mephiston went himself, along with his honour guard, aboard the battle-barge Europae.[Needs Citation]

Arkio's corruption was nearly revealed for all to see when he spent too much time in the chapel in the presence of the Spear of Telesto, which somehow triggered rampant mutation all over his body and then rejected him. During this time, Arkio suffered a prophetic vision of his brother plunging the Spear into his heart. The mutations were barely stopped by Inquisitor Stele's psyker powers, who convinced Arkio that the vision was from Sanguinius and that it was what would transpire if they failed him.[2f][2g]

Mephiston soon arrived aboard the battle barge Europae to judge Arkio, and turned his witch-sight upon him. He saw the carefully-hidden seed of Chaos that Stele had planted inside Arkio, and was surprised when Arkio was able to hold the Spear of Telesto, but remained unconvinced and denounced Arkio as being false and Stele as a heretic. Mephiston challenged Arkio to a duel, for it was written in the Book of the Lords that the Pure One would be the match of any warrior that lived. The duel was about to begin when Rafen turned up, having survived the Warriors of the Reborn's attempts on his life, and Mephiston allowed him to take his place. Although Arkio had the inhuman strength that his mutations granted him, Rafen had more experience. During the resultant fight, Arkio attempted to use the Spear's power against Rafen as he did the Word Bearers, but it refused to harm one who carried Sanguinius' gene-code, and Rafen was able to cut a wound into Arkio's wings. Shocked, Arkio fled the field as his warriors and Mephiston's turned on each other (triggered when Stele psychically killed Sachiel and blamed Mephiston). When the Word Bearers suddenly arrived on the field, Mephiston revealed that he had ordered the Europae to destroy Sabien with cyclonic torpedoes if they failed to stop Arkio's followers; but Rafen insisted that he could stop his brother, and was given a jump pack so he could fight him on even terms.[Needs Citation]

Rafen caught up with Arkio atop a ruined cathedral and the two fought. During the fight, Arkio's mutations resurfaced, fuelled by his hate for Rafen, and the Spear of Telesto rejected him, burning white-hot in his hand until it melted the master-crafted gauntlets and he was forced to drop it. Enraged, Arkio's visage turned into the likeness of a vampire, and he tried to kill Rafen with teeth and claws alone, but Rafen knocked him aside with his combat knife. As Arkio fell, the Spear of Telesto sensed him coming and shifted to meet him head-on, impaling him upon its teardrop blade.[Needs Citation]

As Rafen reached his brother's side, he saw that although the mutations remained, his delusion had cleared and he finally realized the full horror of what he had done. Knowing that he was dying, he accepted that he was damned forever in the eyes of the chapter and the Emperor, but begged for his brother's forgiveness, which Rafen granted him. After Arkio died, Rafen cast his corpse into the midst of the rebellious Blood Angels, showing them once and for all that their messiah had been a Chaos puppet. Sickened at the sight, the rebels renounced their oaths to Arkio and joined Mephiston's forces in attacking the Word Bearers.[Needs Citation]

Arkio's remains were burned upon a pyre out of respect.[Needs Citation]