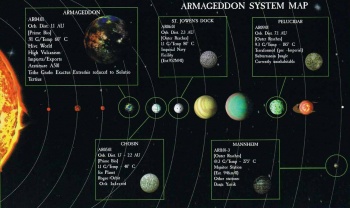 There are ten planets in the Armageddon system, although not all of them are inhabitable.

The inner two planets, Kernbright and Verity are too close to the system sun to be colonised. This is not true of the third world, Gaval, which sports an Imperial mining colony. The inhabitable area of the system continues with the fourth world, Armageddon itself, fifth the Ice World Chosin and sixth the Imperial Navy-dominated world called St. Jowen's Dock. Two gas giants, Namara and Gramaul follow, with the ninth world being the curiously xeno-terraformed Pelucidar. Pelucidar is considered suspect and is largely off-limits to Imperial citizens. The tenth and final world is Iandai, a ringed gas giant.[2]

The Third War for Armageddon resulted in status changes in the system. The system Monitoring Stations Mannheim, Dante and Yarrick were all destroyed, while Chosin became completely Ork infested. St Jowen's Dock was heavily assaulted by the Orks, who also attempted to land on Pelucidar. Their force vanished without trace and the world remains uninhabited.[1a]

Armageddon was formerly Ullanor until the Cult Mechanicus used Ork-based technology as part of their Grand Experiment to teleport the planet into the system. They sought to hide it in this to be colonized planet so they could plunder the world of any remaining technology.[8]

Unknown to the greater Imperium at large, Armageddon was in fact originally the world of Ullanor, made famous by the Ullanor Crusade during the time of the Emperor. 1,500 years after the Horus Heresy during the War of the Beast, Ullanor became the capital world of The Beast and was thought destroyed by the Mechanicum. In truth, the Mechanicum simply teleported Ullanor into the Armageddon System.[8]

The First War for Armageddon is perhaps the least known, and probably for good reason. In 444.M41 Cultists worshiping the Chaos god Khorne broke out in rebellion during a Warp storm. Soon, a great Space Hulk — Devourer of Stars — appeared over the planet, containing none other than Angron, the Daemon Primarch of the World Eaters.[5]

With the Wolves bolstering the defences, the Grey Knights teleported to the centre of the Daemonic horde. The Grey Knights eventually banished Angron and his army from the material world, leaving the cultists to be crushed by the Imperial counterattack. Victory was imminent, but one final tragedy was to strike the planet.[5]

In order to preserve the secret of the Daemon Primarch and the Grey Knights, the entire population of Armageddon, as well as all the surviving soldiers, were rounded up, sterilized, and sentenced to work camps for the rest of their lives while a new population was brought to re-settle the planet.[10a] Despite these cautions, several thousand Guardsmen managed to slip through the containment action, forcing the Inquisition to take more drastic measures in order to preserve the secrets of the daemons and the Grey Knights. Many Imperial Guard troopships were destroyed as they departed by Grey Knight Strike Cruisers, and in the Tremayne sector, three entire worlds were put to the sword to ensure the silence of a single company of Storm Troopers who had fought at Helsreach Hive alongside the Grey Knights.[4]

Logan Grimnar, the Great Wolf of the Space Wolves, has never forgiven the Inquisition for carrying out such a betrayal of the men and women who fought for their world.[10b]

The Second War for Armageddon featured a huge force of Orks in 941.M41 led by the mighty Warboss Ghazghkull Mag Uruk Thraka. The Overlord of the planet, Herman von Strab, was completely unprepared for the attack and his own pride and incompetence only made matters worse. Eventually, the defence of the planet was taken over by Commander Dante of the Blood Angels. The forces involved were the Salamanders, Blood Angels, Ultramarines, Imperial Guard and Squats. During the war an Imperial Commissar named Yarrick, who had been exiled by von Strab to Hades Hive, led a heroic defence of the Hive that eventually distracted Ghazghkull from the planetary battles. This infuriated him enough to send more and more forces against Hades Hive. The battle escalated to such proportions that Ghazghkull considered the fight a matter of personal pride, and took command of the forces assaulting Hades himself. Although the Hive eventually fell, the distraction gave the Imperial forces enough time to mount a counterattack that finally broke the back of the Ork invasion force. Yarrick survived and would clash with Ghazghkull again. Von Strab escaped from his jailers, and the Orks were forced away, humiliated in their defeat. They would have to return to avenge their failures.[Needs Citation]

The Third War for Armageddon occurred fifty years after the Second War. Ghazghkull Thraka returned, leading a second Waaagh! smashing into Armageddon. Commissar Yarrick and many of the heroes who fought for the planet before were called into battle again.[Needs Citation]

Although the 3rd Armageddon War is over (with the Imperium winning a narrow victory), fighting still continues on the planet. Ghazghkull has left the planet and continues to plague neighboring Imperial worlds. He is being pursued by Yarrick with a full Black Templars crusade at his back. The Orks have come to regard Armageddon as a kind of Valhalla, where they can always come to find a good fight, and the Imperium must still send more troops to battle to keep the planet in Imperial hands while Ork reinforcements continue to flood in.[3]

After appearing the Great Rift at the end of M41, Armageddon has found itself directly in the path of The Blood Crusade, a vast legion of Khorne's Daemons pouring into realspace. Since that time the planet again was faced with the Daemonic Invasion and on the ash wastes of Armageddon now fighting not two, but three great forces, as Orks, Imperials and Khorne's followers has clashed with each other.[9]

Armageddon is known to produce its own patterns of numerous weapons and vehicles. Armageddon-Pattern Vehicles tend to be environmentally sealed, a necessity for fighting on Armageddon in order to protect both the pilot and machine from the corrosive effects of the planet's ash waste sands.