The Armageddon Ork Hunters, sometimes referred to as the "Skull Takers", are elite warriors that were formed after the Second War for Armageddon from the survivors of various destroyed Imperial Guard Regiments. They specialise in jungle warfare and are stationed in the remote Cerbera Base. The Hunters fight deep in the equatorial jungles between Armageddon Prime and Armageddon Secundus which have become infested with thousands of Feral Orks who have plagued the Imperial forces incessantly.[1] 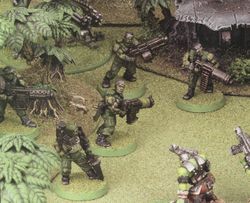 Ork Hunter soldiers are savage warriors and in their short history have already earned themselves a fearsome reputation. Squads need to operate in isolation for many weeks in the jungle and frequently return to Cerbera base with grisly trophies taken from the Orks they have slain. These trophies often take the form of Ork "teef" necklaces and skulls as well as more mundane items like glyphs and Stikkbombz. In addition to his normal equipment every Ork Hunter also carries a 'scalper', a huge machete-like weapon that can be used to decapitate an Ork with one blow. Their feral appearance and coarse manner has led to the Ork Hunters being regarded as little better than the Orks they hunt and earned them the enmity of many regiments stationed on Armageddon.[1]

After the Second War for Armageddon, the long process of rebuilding Armageddon's infrastructure began. Although the Ork armies had been defeated, due to their reproductive nature, spores were emitted into the jungles, which grew into fully fledged Orks. The leader of the ruling council of Armageddon, General Kurov, led several campaigns of extermination to destroy infestations across the planet, as well as on the nearby Ice World of Chosin. The Imperial forces involved suffered very heavy casualties and many units were reduced to below a tenth of their operational strength. Kurov then made an excellent decision and merged the remaining soldiers into the special Ork Hunter units, making full use of their Ork hunting skills. This meant that soldiers from many different worlds and cultures were mixed together. Though they couldn't understand each other's languages it worked surprisingly well as the missions required little communication. The Feral Orks they encountered were adept at fighting in the jungles and were difficult to bring to a decisive battle. The Ork Hunters therefore built Cerbera Base in the middle of the jungle which provided them with a forward base from which they could plan their assaults and build training facilities. The extreme heat and tough regime soon earned it the nickname Hell Town.[1]

The Ork Hunters not only hunt Orks, but are trained in various different methods of warfare, including demolition, escape and evasion, survival and intelligence work. The trainees are expected to become masters of their weapons and techniques, and those who survive (for the mortality rate is alarmingly high), receive the metal pin of the Ork Hunters, an Ork Skull emblem. From this they have derived their name, the 'Skull Takers'.[1]

It is well known the savage and brutish nature of the Ork hunters is a point of contention with other, more cleancut and traditional regiments of the Imperial Guard. The 'Battle of Hell Town', between the Ork hunters and the Pyran Dragoons is a well-known example of how hot tempers can run between the two groups.[1]

The Ork Hunters on Armageddon are assisted by three regiments of Catachan Jungle Fighters, sent to fight alongside the Ork Hunters by the order of Comissar Yarrick himself. Despite the rivalry between these two groups, the Ork Hunters need as much help as they can get. Although the Ork Hunters were not born into the jungle and hence will never be the equal of the infamous Catachans, they have become highly skilled nonetheless. They are the only survivors of apocalyptic combat between their previous regiments and the Orks of the equatorial jungle, and every one of them is as skilled as they are tough.[2][3]

Ork Hunters are known to employ elite teams made up of their deadliest members, comparable to the Storm Troopers of the Militarum Tempestus who are called in to aid other regiments.[Needs Citation]

Ork Hunter Firesweep Teams - The Ork Hunters of Armageddon have developed many different tactics since the Second Armageddon War in an effort to rid the jungles of Armageddon Secundus of the many Feral Orks that infest the region. Lethal toxins have been developed and tested, as well as many traps designed purely to wipe out as many Orks as possible. At the forefront of the Ork Hunters continuing war against their primitive enemy, though, are the elite Firesweep Teams, squads of the regiment's most skilled warriors, those that have been battle-hardened by years of fighting in the jungle. Armed with flamer weapons, they can clear huge areas of the jungle of all Ork infestation within hours and in pitched battle their bravery gives them a keen advantage over any Ork hoping to hide within the dense undergrowth. Some of these elite warriors have even been known to wield the crude and heavy axes of the Orks in close combat.[4][2]