The Armageddon Steel Legion are the Imperial Guard Regiments native to the Hive World of Armageddon. True to its name, Armageddon has been the site of three massive battles in the history of the Imperium, most recently a pair of invasions by the Ork Warboss Ghazghkull Thraka. As a result, the armies of Armageddon are very skilled in fighting Orks.[1] 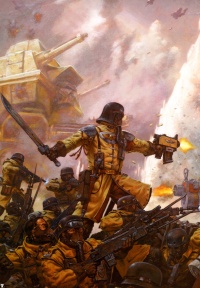 The Steel Legion operates mainly on Armageddon and the planets of its surrounding system. They operate primarily against Orks, as they have gained experience fighting against them during the Third War for Armageddon.[Needs Citation]

Much like the Death Korps Grenadiers, the Storm Troopers of the Armageddon Steel Legion are fully part of their own regiments and homeworld. The only noticeable difference is that they are instead split into divisions, this allows them to assist different companies of regular guardsmen during high-risk missions or on important campaigns. Steel Legion Storm Troopers pride themselves on being their regiment's finest soldiers, and whilst distant from regular guardsmen, they are still shown a great deal of respect within the Legion, whose rank and file members rightly consider them to be the "best of the best". Steel Legion Storm Troopers are armed with powerful Hellguns that are attached to notably heavy, thrumming power generators. They are also known to wear the Legion's iconic re-breather masks and don thick, ochre coloured trench-coats over their Carapace Armour.[8]

Each regiment raised on Armageddon is composed of twelve companies, typically a mix of infantry, armour, artillery and mechanised infantry. Infantry and mechanised infantry companies consist of a command section, a fire support platoon with 10 heavy weapons teams, and three infantry platoons of 50 soldiers each, including 5 heavy weapons teams. At full strength a company would have 175 soldiers, though casualties suffered during battle will quickly reduce this.[2a] Tank and artillery companies consist of a command vehicle and three squadrons or batteries of three vehicles each.[2a] Super-heavy tank companies are composed of three super-heavy vehicles.[2b]

Additional units can also be attached to a company to function as part of their organic structure. These include a fire support platoon, an infantry platoon, a tank squadron, a Hellhound squadron, a Griffon battery, a Hydra flak tank, and/or a two-man Sniper or Ogryn team. Normal practice limits companies to three such attachments, and never more than one of each type.[2b]

The Armageddon Steel Legion are recruited from the planet Armageddon and are trained under standard Imperial Guard methods.[Needs Citation]

The Steel Legion regiments are primarily Mechanized Infantry, and Armageddon produces many armoured fighting vehicles for the Imperium, such as Chimera APCs. This allows them to launch rapid attacks in which the Chimeras overrun enemy lines before the infantry disembarks to finish them off. Regiments are sometimes supported by Conscript Platoons and Ratling snipers.[Needs Citation]

The mechanized regiments of the Steel legion are extremely mobile and can be shifted within the shortest time to the front or to support a threatened front section.[Needs Citation]

Guardsmen of the Steel Legion wear a uniform of mustard yellow greatcoat, heavy boots and gloves, gas-masks and rounded bowl helmets over black fatigues. This is however only the most commonly seen uniform and uniform presumably varies slightly between regiments as with all Imperial Guard.[Needs Citation]

The Armageddon Steel Legion make use of Grenade Launchers and Missile Launchers. The preferred armoured vehicles are Leman Russ Battle Tanks, with Vanquishers serving as command vehicles, though they are known to include a few Leman Russ Executioners.[5a] Artillery is usually Basilisks, Bombards and Manticores, while super-heavy vehicles are typically Baneblades and Shadowswords.[2a]