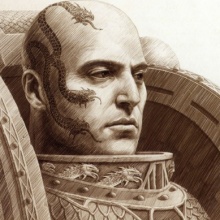 Very little about him is known, and his name may itself be an artificial construction using mimetic factors from several different dead Terran dialects meaning "The Fallen prince/False prophet who destroys with power". His appearance was only provided thanks to Ultramarines recordings acquired by Remembrancers during the Palcine War Council. There, Dynat was said to have infamously sparred with Marius Gage over the conduct of the war after the Ultramarines failure in the Battle of Asarna Bay.[1]

He was known to have been a formidable strategist with a penchant for unorthodox but highly intricate attack plans often designed to pull apart and maim enemy formations before delivering a killing blow. Additionally, he was known to be a master of integrated close air support and armor combined arms tactics. He is thought to have been a commander during the notorious Tesstra Compliance and the mastermind behind the Oannessi Genocide. His name quickly became feared during the Horus Heresy, beginning with his presence at the Invasion of Paramar V.[1] 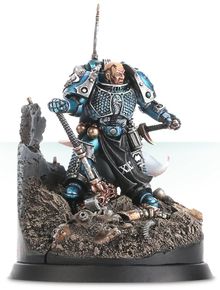